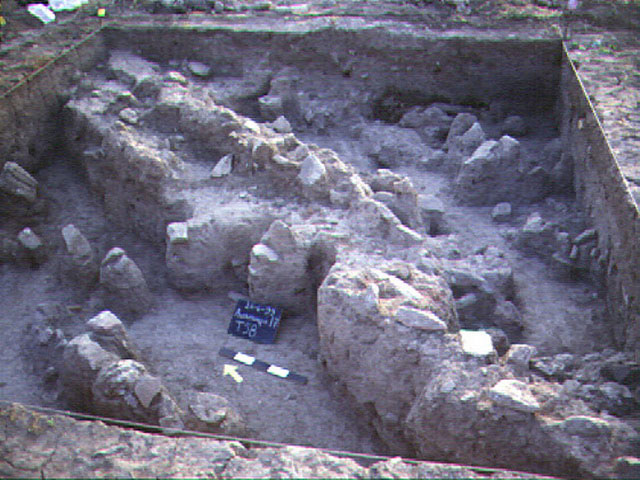 Very important prehistoric finds compose the picture of an unknown by a broader audience Neolithic settlement, which has been located close to the Microthebes junction.

The settlement, dated primarily to the Middle Neolithic period (5800-5400 BC), is a declared archaeological site, located in Magoula Belitsi, approximately 200 m to the west of the national road Athens-Thessaloniki and the Microthebes junction. It is estimated to be an area of some 2,5 hectars. Findings indicate human presence during Middle Neolithic period, and an organized Neolithic settlement at the site, while the occupation of that area is estimated to have continued until the Late Neolithic period. The first houses of the settlement were built on the low-lying parts that determine the northern border of the Almyros valley, on the eastern side of the stream known as Aetorema. The site gave its dwellers access to the lowland ecosystem and the narrow hills at the North, thus offering a variety of food sources.

Small scale archaeological surveys have been conducted in parts of the Neolithic settlement during the last decade, revealing plenty of impressive finds, that shed light to the everyday life and the habits of the prehistoric society, 7500 years ago. The astonishing number of finds include prehistoric tools, clay artifacts and figurines, animal bones, shell jewellery, prehistoric millstones that were used for grinding wheat, all of which underline the agricultural and cattle-breeding character of the settlement.

In every square meter investigated, plenty of prehistoric tools came to light (approximately 3,000), made of obsidian and flint. No food remains were found, but archaeologists have collected charred seeds, which were investigated and found to be wheat seeds. The settlement came to light during widening road works. Archaeological surveys were conducted from 1999 to 2001, revealing an astonishing abundance of finds which give information about the distant past.

“The houses of the Neolithic settlement were made of wood and clay plaster, in accordance to the housing techniques we come across at the inland of Thessaly during the same period of time, and in contrast to the houses of Dimini and Sesklo, which had stone foundations” says archaeologist of the 13th Ephorate of Prehistoric and Classical Antiquities Kostas Vouzaxakis. First they built the wooden frame of the house, pounding pilings in the ground and then the space between the pilings would be filled in with a “wattle” made of branches and reeds. Then they coated the wooden framework with clay. They probably used a similar technique for the roof. Based on the finds, researchers gained valuable information about the construction techniques of the houses at the settlement. According to newest finds and what they know about similar settlements, archaeologists can “imagine the houses of the settlement built on the narrow hill, while around it in a forested area there must have been scattered small cleared and deforested areas for cultivation, as well as grassland” as Mr. Vouzaxakis marks out.

The agricultural and cattle-breeding character of the groups that inhabited the settlement is being attested by plenty of finds. The large number of flintstone and obsidian tools found, as the millstones that came to light after thousands of years testify to agricultural activity. Apart from the results of the palaeobotanical study, after the tools and pottery have been investigated, archaeologists hope they will come to more accurate conclusions about the everyday activities of each period of the settlement, and the methods of cultivation.

Archaeologists also gained a lot of information from the animal bones, the clay spools and shells that were used as counterweights and attest to weaving activity.

The prehistoric finds are very closely linked to the eating habits of that period. The inhabitants’ diet was based on meat and cereals. During excavations no fish bones were found. In the contrary, seashells were discovered, which, apart from their nutritional value, were used for the making of jewellery.

The activities of this distant past are indicated by a great number of movable finds that have been discovered and include many clay pots. These are handmade vessels – which means that the dwellers of the site did not use a pottery wheel. A small number of vessels however is decorated either with colour or with engravings. They show a wide variety of shapes and motives.

Another impressive find were the dozens of clay figurines depicting mostly human figures and ox heads. Among the animal figurines, one is showing the front part of an ox confirming the co-existence of animals and the Neolithic man.