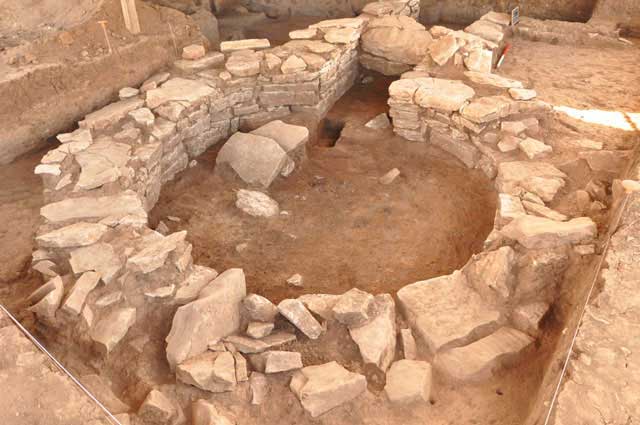 One of the largest tell sites in Greece

A new, important prehistoric site is being unearthed in central Greece.

The third field season of the Koutroulou Magoula Archaeology and Archaeological Ethnography project was completed a few days ago, bringing to light an important and extremely well preserved prehistoric site. The site of Koutroula Magoula, near the villages of Vardali and Neo Monastiri in Fthiotida is one of the largest tell sites in Greece covering of area of around 4 hectares, and rising 6,6 meters above the plan. It was occupied during the Middle Neolithic period (c. 5800-5300 BC) by a community of a few hundred people who constructed elaborate and architecturally sophisticated houses out of stone and mud-brick and with stone-paved under-floors. Some walls are preserved more than one meter in height which is extremely unusual for this time, raising the possibility of entirely stone-built walls, and not just stone foundations, as has been hypothesized to date.

Excavations on this site started in 2001 by Dr Nina Kyparissi and are currently co-directed by Prof. Yannis Hamilakis and Dr. Nina Kyparissi, as part of a synergasia project (collaboration) between the Greek Archaeological Service and the University of Southampton through the British School at Athens, which was launched in 2010. The excavation has produced a range of important finds, including a large number of clay figurines, the total number of which exceeds 300, one of the highest densities of such finds in any Neolithic site in South Eastern Europe.

Geophysical prospection and topographical research revealed that the Neolithic people of Koutroulou Magoula had modified the mount, constructing at least three terraces. A series of curvilinear ditches seemed to have surrounded the settlement. This was a major communal project which required co-ordinated, collaborative effort by a large number of people. There is no evidence for a centralized authority to date; and yet large numbers of people were able to get together and carry out large communal, and possibly socially beneficial projects.

But the mount was an important memory place in the subsequent centuries too: at the end of the Bronze Age, a tholos tomb was constructed at the top of the tell, whereas in the Medieval times (12-13th c. AD) at least one person (a young woman) was buried amongst the Neolithic houses.

In addition to excavation, the project has conducted systematic ethnography amongst the local communities, and has engaged in a series of community and public archaeology actions, including the production and staging of site-specific theatrical performances, which turn into communal celebrations with food, drink and dance.

The project team will conduct two study seasons in 2013 and 2014, at the end of which the results will be published in scholarly and popular journals.