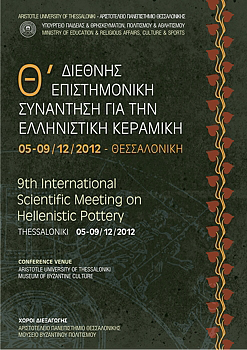 Being interested in the effective continuation of a successful institution, the permanent Scientific Committee of the Meetings on Hellenistic Pottery, planned to hold the 9th Meeting in Thessaloniki. The choice of the city is of particular importance as Thessaloniki has been predominantly Hellenistic. It was founded by King Cassander, and had an apparent and dynamic presence both in the times of the Kingdom of Macedonia, and during the late Roman Republic. The modern city, after one year of continuous work in the tunnels for the construction of the Metro, has witnessed numerous new finds of Hellenistic pottery, which accompany the rich grave offerings from the past, exhibited in the Archaeological Museum and the upcoming Museum of Antiquities of METRO. In addition, in 2012, Thessaloniki celebrates 100 years after its liberation and integration to the modern Greek state.

The 9th International Scientific Meeting on Hellenistic Pottery will take place on 5-9th December 2012. On December, 8 there will be a workshop at the Archaeological Museum of Thessaloniki, while on December, 9, the last day of the meeting, an excursion to the archaeological site of Aiani (Kozani), is planned. More than 70 scientists of the international archaeological community will be participating at the meeting.