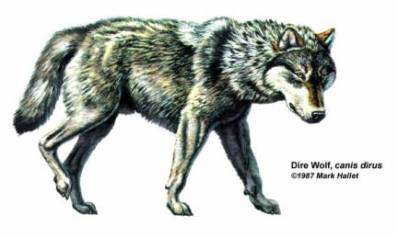 Researchers of the University of Nevada (Las Vegas) recently revealed fossil remains from an extinct wolf species in a wash northwest of Las Vegas. This is the first evidence that the Ice Age mammal once lived in Nevada.

Last year, UNLV geologist Josh Bonde uncovered the metapodial, or foot bone, during a survey of the Upper Las Vegas Wash. Researchers now confirmed that the bone comes from a dire wolf, and estimate the fossil to be 10,000 to 15,000 years old during the Late Pleistocene period. The dire wolf is a larger relative of the gray wolf.

According to Bonde, “dire wolves are known to have lived in almost all of North America south of Canada, but their historical presence in Nevada has been absent until now.” The new discovery reveals valuable information about the Ice Age ecosystem in Southern Nevada.

Dire wolves were present in much of North and South America for more than a million years. Researchers assume its extinction, 10,000 years ago, was caused by competition from other wolf species and a possible food scarcity.

“This discovery helps flesh out Southern Nevada’s Pleistocene ecosystem and shows that there are still important discoveries to be made in the Upper Las Vegas Wash,” said UNLV geology professor Steve Rowland, a collaborator of Bonde on the study of local Ice Age fossils. “To understand why certain species became extinct and others did not, we need to learn as much as possible about predatory habits and which species were especially sensitive to changes in the environment.”

The discoveries in the area come exactly 50 years after scientists conducted a ‘big dig’ at Tule Springs, revealing the site to be rich with Ice Age fossils.

The dire wolf bone, in addition to other bones collected by UNLV researchers, are cataloged, studied, and stored at UNLV.