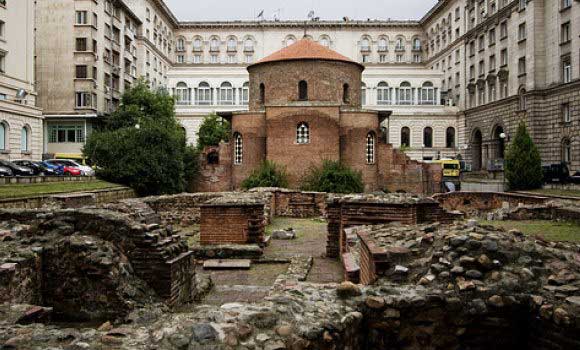 Basilica from the Time of Constantine the Great

Bulgarian archaeologists located a basilica they believe dates from the era of emperor Constantine the Great. The basilica, 27 meters wide and about 100 meters long, was found in the area of the West Gate of Ulpia Serdica, as the city was renamed after it was conquered by the Romans around 29 BC. The building featured multi-coloured mosaics.

The find could prove that Constantine the Great intended to establish the city as the centre of Christianity, as Bulgarian officials explained. However, the continuation of surveys at the building will be difficult, as it lies under the modern city of Sofia.

Constantine, the first Roman emperor to convert to Christianity, ruled from 306 to 337 AD. After Ulpia Serdica became the capital of Dacia Mediterranea, it expanded for a century and a half, which caused Constantine the Great to call it “my Rome”. Sofia deputy mayor in charge of culture, Todor Chobanov said that the discovery of the basilica suggested that this saying attributed to Constantine was “not just words”.

Excavations at the site have been conducted in the past, between 1975 and 1980. The current archaeological surveys are a continuation of these previous ones, as Borissova-Katsarova, a professor at Sofia University said. The project is being funded mainly by Sofia municipality.

The municipality of Sofia has plans for creating a garden and a park in the area, which would enable visitors to view the discoveries at the archaeological site.

The archaeological team has revealed the wall, a gate and tower, dating to the 5th-6th century AD. The wall, initially built in the 2nd century by emperor Marcus Aurelius, was later expanded.

According to Borissova-Katsarova, the finds (like pipelines for fresh water) suggest that Ulpia Serdica had been a very well developed town in terms of irrigation and sanitation.