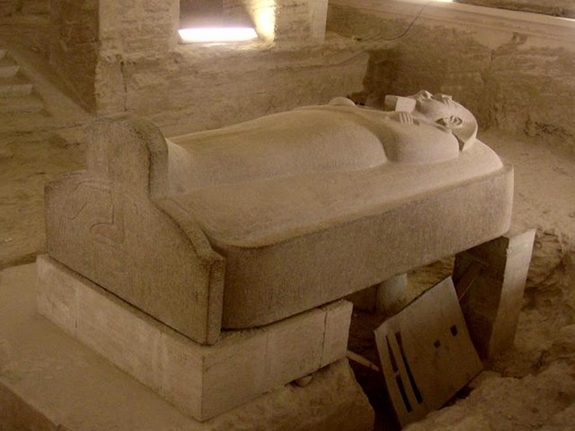 His mummy was enclosed in a series of four sarcophagi, one nestled within the other.

The largest ancient Egyptian sarcophagus has been identified in a tomb in Egypt’s Valley of the Kings, say archaeologists who are re-assembling the giant box that was reduced to fragments more than 3,000 years ago.

Made of red granite, the royal sarcophagus was built for Merneptah, an Egyptian pharaoh who lived more than 3,200 years ago. A warrior king, he defeated the Libyans and a group called the “Sea Peoples” in a great battle. He also waged a campaign in the Levant attacking, among others, a group he called “Israel” (the first mention of the people).

When he died, his mummy was enclosed in a series of four stone sarcophagi, one nestled within the other. Archaeologists are re-assembling the outermost of these nested sarcophagi, its size dwarfing the researchers working on it. It is more than 13 feet long, 7 feet wide and towers more than 8 feet above the ground. It was originally quite colorful and has a lid that is still intact.

The decorations on Merneptah’s different sarcophagi offer a clue as to why he built four of them. They contain illustrations from two compositions that describe the sun god’s journey at night, one is called the ‘Book of Gates’ and one is called the ‘Amduat’. These books are divided into 12 sections, or “hours.” For the king repeating scenes like this over and over may have been important, it’s as if his body were enclosed with these magical shells that have power of resurrection.