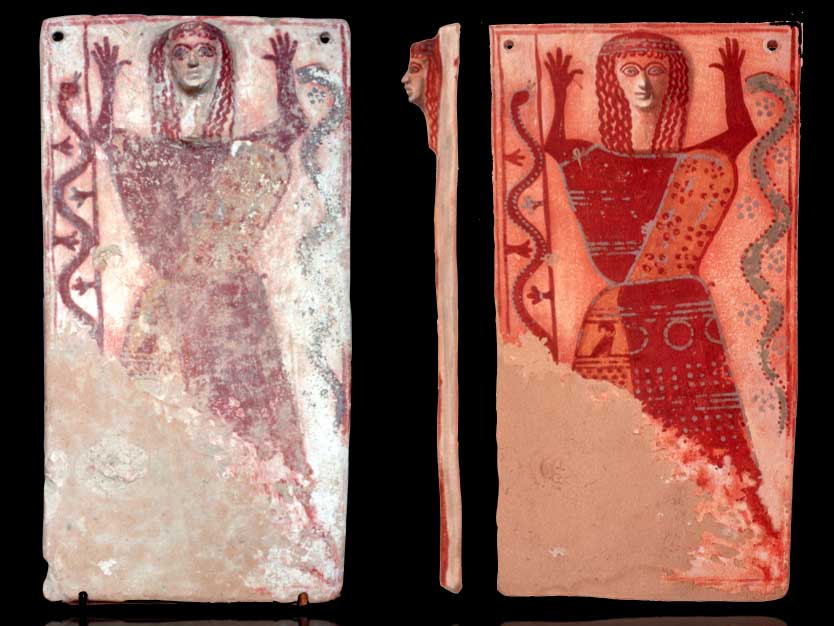 Michael Laughy of Washington and Lee University in Virginia presented his findings about the mysterious “Snake Goddess” at the 114th Annual Meeting of the Archaeological Institute of America in a lecture entitled “The Identity of the Seventh-Century B.C.E. Athenian ‘Snake Goddess’”.

In 1932, a large Protoattic votive deposit was discovered lying directly atop the ruins of a Geometric period oval building, located near the southwest corner of the Athenian Agora. This deposit is among the largest and best preserved seventh century B.C. E. votive assemblages found in all of Attica. Included within the deposit are a number of terracotta tripods, shields, horses, and chariots, as well as a remarkable terracotta plaque of a goddess with snakes. The consensus among archaeologists today is that these terracotta votives are indicative of hero or ancestor worship. A reexamination of the deposit suggests a rather different conclusion: the votives came not from a hero or ancestor shrine, but from a sanctuary to Demeter. The “snake” goddess on the plaque is none other than Demeter herself.

This conclusion has broader implications for the study of religion in early Athens. An examination of terracotta votives at contemporary deity sanctuaries in Athens and Attica suggests that dedications of votive tripods, shields, horses, and chariots provide the earliest evidence that ritual processions and competitions, common at elaborate Late Geometric funerals, became part of festival life at some deity sanctuaries by the beginning of the seventh century B.C.E. As such, these terracotta votives provide valuable insight into a period in which the center of the Athenian ritual world shifted from the grave to the sanctuary.

The mysterious goddess is flanked by two snakes of terracotta about the size of a piece of notebook paper. She has her hands up above her head, which has given her the nickname “the touchdown goddess” thanks to the resemblance of the pose to a referee’s signal. The goddess is painted in red, yellow and blue-green on a tile, with only her head molded outward in three dimensions.

However, the snake goddess isn’t originally from the agora. The gravel and figurine fragments were fill material, brought in from an unknown second location to build a path or road in the seventh century B.C.E. “Not only is our snake goddess unidentified, but she ‘s homeless,” according to Michael Laughy. “She got mixed up in that road gravel, presumably obtained near the site of her original shrine.”

The terracotta figurines were used during this time period as offerings at the sanctuaries of gods and goddesses, Laughy told LiveScience after presenting his findings at the annual meeting of the AIA. As votive offerings were considered sacred, it is strange to find votives used as road fill, Laughy explained.

Tracing the source of this fill is a difficult task. Previously, archaeologists have assumed the figurines originated from the worship of the dead, linking the items found in Athens to ones found at a Bronze Age tomb outside the city. But the items at that tomb don’t match all those found in the Athens agora, Laughy said.

This led the researcher to the conclusion that the snake-flanked woman is probably both a representation of and an offering to a goddess, namely Demeter.

Demeter is a strong candidate, as there was a shrine built devoted to her in the seventh century near the Athens agora, he said. It’s the only sanctuary where ancient Greeks are known to have left loom weights and spindle whorls, which are found in the Athens fill debris. Furthermore, Laughy said, the spot was graded in the seventh century, which could have produced a debris pile that was then carted away to make paths in the agora.

Finally, the goddess’ serpentine companions also point to Demeter, who was associated with snake iconography in the seventh century, according to Laughy.

Either way, the snake goddess is “striking,” Laughy said. It’s one of the earliest multicolor paintings found in Athens

“It’s an amazing piece of work,” he said.