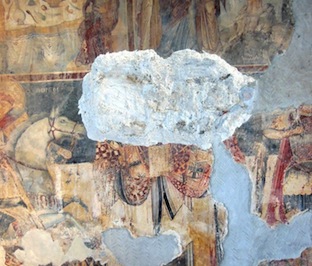 Work of the famous iconographer Onoufrios

The violent removal by primitive means of wall paintings dating back to 1554, made by the famous iconographer Onoufrios, from the orthodox church of Aghia Paraskevi in Gjinari of Elbasan, caused a series of various reactions.

University professors, researchers, archaeologists, and scholars raise their voices against this vandalism act, that damaged another rare cultural monument of orthodox heritage in Albania.

The Historical Heritage Forum in Albania organized a protest rally in front of the Ministry of Culture.

However, the reactions do not refer to the religious aspect of the event, but only to its cultural significance.

The vandalism acts took place on December 30, 2012 and on January 4, 2013. Despite the fact that police were immediately informed after the first theft, when the heads of five saints were removed, no measures were taken. The robbers came back and removed other parts of the icons.

Talking to AMNA, the head of the Autocephalous Orthodox Church of Albania, Gentian Stratoberdha, said that thefts, vandalisms and desecrations of orthodox churches in fact never stopped. In the last two years similar thefts occurred in 20 churches and monasteries, which are also important cultural monuments. Mr. Stratoberdha mentioned the areas of these thefts, which are Berati, Gjirokastër and Korçë, in other words the south of the land.

Mr. Stratoberdha also said that after the thieves had finished their… work with the icons and other valuable movable objects of the orthodox churches, they have now turned to the wall paintings.

Mr. Stratoberda wonders why police haven’t yet arrested none of the thieves. He also expresses his concern that this might lead to a “total loss of our Christian heritage”.

The Albanian Ministry of Culture in a recent statement has denounced the theft as “vandal”, and pointed out that “given the big number of religious monuments, it would be practically impossible to guard them around the clock”. In the statement, it is also mentioned that in cases like the one of the Aghia Paraskevi Church, where the religious institutions are being used by believers, the protection and care of the monuments is not only the state’s concern but also that of the believers’ community.

On this matter there is a disagreement between the Orthodox Church and the Albanian Ministry of Culture. The Ministry’s director of the Cultural Heritage Department, Apollon Bace insists that “respecting the law, we have asked the Orthodox Church to take over approximately 380 churches and monasteries that until now were under the jurisdiction of the state, but the orthodox clergy refused to take them over”.

The Orthodox Church, on the other hand, insists that the number of these monuments is 170 and not 380, because the church refers only to churches that can be used by the Christians. The rest of them either cannot be used because they are ruined, or they are rather monuments of archaeological and not religious interest (like the ones of the Late Christian period).

The Church’s representatives also point out that this procedure will be carried out gradually, and that the Church claims to take over not only the buildings but all the estate surrounding the monuments, as the plot. The Church also claims that, even after they are handed over to the orthodox clergy, the state will remain responsible for their protection and preservation.