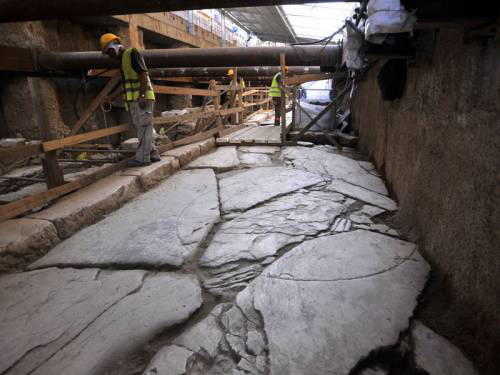 The excavation conducted by the 9th Ephorate of Byzantine Antiquities at the Venizelos station in Thessaloniki has brought to light in abundance the “core” of the cosmopolitan city of Byzantine era: a very well preserved 70-meter section of the main marble-paved road (decumanus), building remains of the city dating to the 6th-9th centuries AD, as well as big public buildings of the 7th century, a rarity for the Byzantine world. The main road axis of the Byzantine city stretches, running parallel to it, underneath the modern Egnatia street, at a depth of 6 m, while the subway tunnel is also running towards the same direction, only deeper (at 11 m depth). All these finds illustrate vividly the diachronic evolution of Thessaloniki’s urban planning, a unique case where the successive historical phases of the city, its past and its present, can be seen as a whole.

Last week, the Central Archaeological Council decreed the removal and the transportation of the antiquities to the Pavlos Melas camp, in western Thessaloniki, agreeing to the proposal of the ATTIKO METRO technicians. Due to the special importance of the matter, the Association of Greek Archaeologists had a meeting with the Deputy Minister of Education, Religious Affairs, Culture and Sports Mr. Kostas Tzavaras on January 23, and asked him not to take a final decision for the fate of the antiquities before an in situ investigation had been conducted by the members of the Central Archaeological Council, with the help of the technical survices of the General Directorate of Culture and the 9th Ephorate of Byzantine Antiquities, so that all alternative solutions for the maintenance of the antiquities in situ, within the modern subway station, were considered. The Deputy Minister nevertheless proceeded to the signing of the relevant Ministerial Decision, by which the opportunity of Thessaloniki to have a unique archaeological site within a subway station will be definitely lost.

The Association of Greek Archaeologists believes that the matter should concern the scientific community, as well as the citizens of Thessaloniki, as:

1. The antiquities of Thessaloniki have already paid a very big price up to this day: almost the whole of the intra muros city was built after WWII without any excavations being conducted in the plots of private ownership, apart from a few exceptions. This horrid practice of the first decades after the war resulted to the disappearance of the [archaeological] remains, as well as of the historical knowledge regarding the most important (after Istanbul) city of the Byzantine Empire. But even during the last decades, in which the Archaeological Service carries out regular rescue excavations, the antiquities are buried underneath new buildings, because the State does not proceed to expropriations and presentation of the excavation finds. Due to this burdened past, the revealed part of Thessaloniki’s urban fabric becomes even more important.

2. The fact that the subway passes along the axis of modern Egnatia street, had as a consequence that other parts of ancient and Byzantine Thessaloniki were also removed from their original position, because people in charge did not take into consideration the warnings of the Archaeological Service, made in due time, that the subway line should follow another route, so that the important antiquities were saved and any delay were avoided. On the contrary, systematic efforts are being made to put the blame for all delays on the archaeological investigations, although the people responsible for the subway construction were aware of the difficulties they would face a long time before the works had started, and although it is widely known that most delays are due to technical reasons.

It is remarkable that even today, while the removal of such an important find is discussed, the construction works in stations where the archaeological investigations have been completed, have stopped. It is hypocritical to give the impression that a possible change of the decision about the fate of the antiquities at the Venizelos station will bring more delays, given the fact that if the antiquities are removed, the excavations will continue in deeper levels.

3. The marble-paved highway and its intersection with the oldest road alignment of the modern Venizelos street, which ended at the port, as well as the remains of the adjacent to these roads buildings constitute an entity, which, according to international agreements for the protection of cultural heritage, is “non-removable”, which is why all efforts should be made so that they are presented in situ. An ancient road cannot become an “exhibit”: if one removes it to another place, it loses its history and its value as a street of the city. If, on the other hand, one finds a way to present it in situ as a visitable archaeological site within the Metro station, it will be a unique example of preservation and the history of the city through time, as well as an attraction pole for visitors of Thessaloniki. The search of an architectural and technical solution for a subway station which, along with the every-day transport of the passengers, would serve as a journey through the history of the city, could be an innovative project of combining the cultural heritage with the modern life, one step further of the successful interventions at the subway stations of Athens, and make this effort a trademark of Thessaloniki.

This co-existence of antiquities and the needs of modern life is a big challenge and it is very important that it is being supported by a big public project funded by the citizens’ taxes. (…)

For all these reasons, the Association of Greek Archaeologists asks that the decision for the transport of antiquities to the P. Melas camp should be reconsidered, and every effort should be made to find a technical solution for their maintenance in situ as a visitable archaeological site within the Venizelos station.

The Association also asks that the excavation site should open for the public, so that Thessaloniki’s citizens can visit this unique find and see for themselves how important its preservation is.