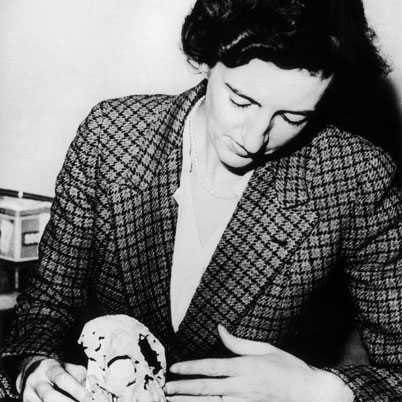 Today Google doodle depicts British archaeologist Mary Leakey, as it is the 100th anniversary of her birth.

Mary Nicol was born on February 6, 1913 in London. She changed her name after she married archaeologist Louis Leakey. The pair was one of science’s best-known husband-wife teams. While excavating the Olduvai Gorge in Africa, Mary discovered a skull fossil of an ancestor of apes and humans, the Proconsul skull. This find helped illuminate the origins of humankind. Mary continued working after her husband’s death. She died in 1996.

Perhaps the most important feature of Leakey is the route she took to archaeology. As she disliked formal education and did not pass any exams, it was impossible for her to study for a degree. Apparently, Leakey used her talent in drawing as her entry into the field of archaeology; she served as an illustrator at a dig in England when she was only seventeen. Nevertheless, she did take lessons in art and archaeology as an unregistered student of the University College London.