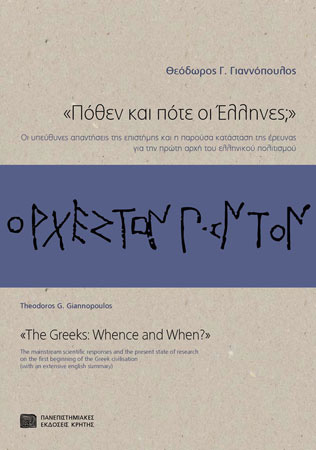 T.G. Giannopoulos, “The Greeks: Whence and When?”

When does the Greek culture begin? How can we methodologically define its starting-point and locate it in time? To which times and which processes should we trace back the origins of the Greeks of historical antiquity?

The present book is a scientific as well as a writing enterprise. It firstly serves as a full, systematic and intelligible handbook of the long-standing international research on the first beginning of the Greek civilisation. The several different theories formulated so far regarding the “Coming of the Greeks” are thoroughly discussed in chronological “windows”, corresponding to the phases of the Aegean prehistory, in which the arrival of the Indo-European Proto-Greek population in Greece has been suggested to have taken place.

Furthermore, a systematic and comprehensible narrative of the prehistory of the Aegean and of several other areas of Eurasia provides the necessary background for understanding not only the complex, interdisciplinary study of the problem, but also the new research synthesis advanced in the book. This new solution to the Indo-European problem, which significantly revises the cultural time depth of Greece and Europe, is also accompanied by a reassessment of some critical issues concerning the origins of the world’s linguistic and anthropological diversity.

The book is writeen in Greek with an extensive English summary.