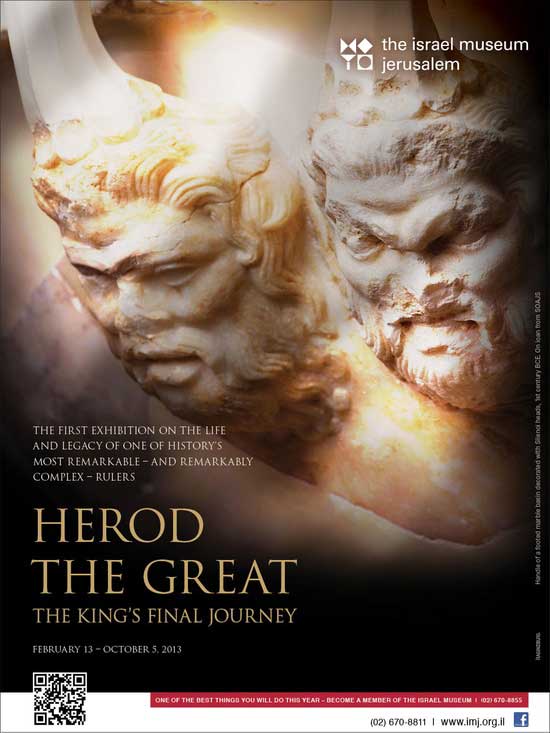 Palestinians say treasures should stay where they were found

Herod’s mausoleum was discovered less than six years ago. Now it has been reconstructed within the Israel Museum in Jerusalem for the first ever exhibition to focus to one of the murderous king. Thirty tones of artefacts were excavated from the site of Herodium, located near the West Bank city of Bethlehem, for the exhibit entitled “Herod the Great: The King’s Final Journey.

The exhibition features 250 archaeological finds, among which an ornate red flower-carved sarcophagus, believed to be Herod’s.

According to the Guardian “The show has met with opposition from the Palestinian Authority (PA), which says Israel is in breach of international law by exhibiting artefacts excavated and removed from the West Bank.” Hamdan Taha, a PA official responsible for antiquities, said the Israel Museum had not consulted it on the excavation and exhibition. The exhibition was an attempt to use “archaeology to justify Israel’s political claims on the land”, Taha said. The site, along with Jericho, was “an integral part of Palestinian cultural heritage”, he added.

The Israel Museum said that Israel was given temporary control over archaeological sites in the West Bank under the 1993 Oslo accords, and that the museum had co-ordinated with the Israeli Civil Administration, which governs Area C, where Herodium is located.

James Snyder, director of the Israel Museum, said the artefacts were on loan and would be returned to the site after the closing of the exhibition (October 5, 2013). He also claimed that all artefacts were in the museum on an authorized basis. However, Yonathan Mizrachi an Israeli organisation that focuses on the role of archaeology in the Israeli-Palestinian conflict, said international law did not permit the removal of artefacts from occupied territory. Excavated material “should be kept in the West Bank and [Palestinian] residents must have access”.

The exhibition, he added, would have “a major political effect on Israeli public opinion about Jewish heritage and will strengthen claims to the land”.