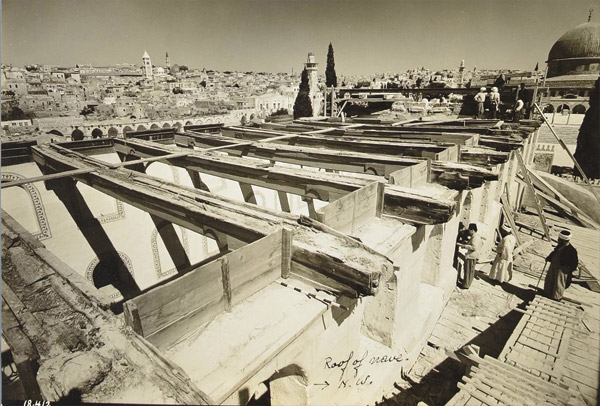 What joins Jews and Muslims?

When the Romans destroyed Herod’s Temple in Jerusalem in 70 AD, little must have remained to remind the spot where this iconic landmark of Judaism monument once stood. The Temple Mount remained empty till the 7th century AD, when the Muslims erected their own two iconic monuments, the Dome of the Rock and the Al Aqsa Mosque. However,  a new research seems to indicate that architectural elements from the earliest Jewish Temple had been incorporated in the later Muslim monuments, in an unexpected cultural “marriage”.

In the May/June 2013 issue of Biblical Archaeology Review, Peretz Reuven studied beams removed from the Al-Aqsa Mosque to reveal that their use there was secondary. Originally, these beams, as well as other architectural elements had been used in the Herod’s Temple and ended up as dirt-fill when the Temple was destroyed.

Due to earthquakes that characterised the area during the past, the Al-Aqsa Mosque had been rebuilt and renovated several times since its original Umayyad construction. During the 1930s and 1940s, large-scale restoration involved the removal of dozens of beams from the mosque’s ceiling, arcades and dome. The great Cedar of Lebanon and cypress beams, some of which are more than 42 feet long, were covered by modern boards for centuries. Still, the wood inside the beams has a longer story to tell. R.W. Hamilton’s 1949 publication on the dismantling of the Al-Aqsa Mosque already noted that many beams showed signs of secondary use. These signs include functional depressions or protrusions intended from their original use as well as decorative woodcarving styles from earlier periods.

Recent carbon-14 tests on the beams confirm their antiquity. Some predate Herod’s Temple Mount: One beam dates to the ninth century B.C.E.—the First Temple period! The exact history of the beams is hard to pin down. They were likely used in two or more different constructions, and poor storage has led to their ever-quickening degradation. However, Dr. Reuven’s study showed details indicating their original use in the Jewish edifices. For example, indentations on the underside of a beam with Herodian/Roman-period decorations suggest that it rested on column capitals in an earlier structure. The indentations are spaced at a similar interval to columns at Herod’s Royal Stoa, allowing parallels to be considered.