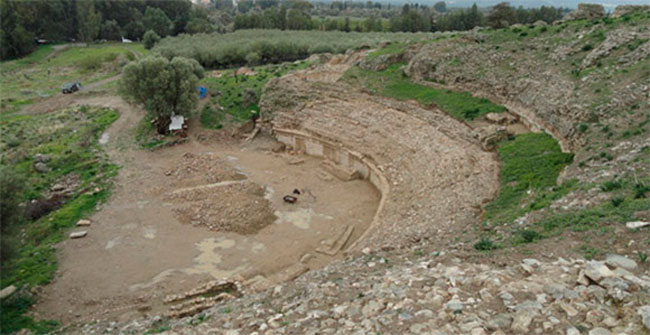 Dozens of amateur photographers of the Hellenic Photographic Society of Crete have captured the imposing beauty of the Great Theater of ancient Gortyna.

The photographers were informed by the Director of 23rd Ephorate of Prehistoric and Classical Antiquities, Athanasia Kanta, and the archaeologists about the history of the ancient theater, the excavations conducted at the site and the invaluable finds uncovered up to now.

The event was organized by the Citizen’s Movement “Proskenion” in collaboration with the Municipality of Gortyna and the team of archaeologists in charge of the excavation who have brought to light the magnificent monument. The aim of this meeting, according to the President of “Proskenion”, Mrs. Vaggelio Schinaraki, was to transmit the archaeologists’ knowledge to the visitors, and to attract attention to the monument, as the pictures taken by the Hellenic Photographic Society of Crete will travel across the world, through the Internet.

As Mrs. Schinaraki said, excavations at the site where the Roman theater of Gortyna is located started in 2008. These efforts turned out to be fruitful, when the magnificent ancient monument was revealed.

The mayor of the Gortyna Municipality, Nikos Schinarakis, said he hopes the excavations continue, so that in the near future the theater can host performances of ancient drama and other events.