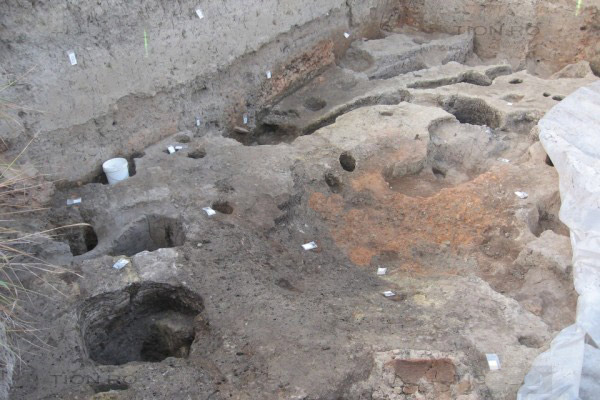 A team of archaeologists led by Professor Florin Drasovean made an impressive archaeological discovery in the the highway section Lugoj – Deva in Romania. The 50 tombs discovered in the village of Păru represent the largest Bronze Age necropolis ever found in Romania. Pottery and stone grinders used in funerary rituals, hundreds of homes dating back the 13th century BCE were also discovered by archaeologists.

Research conducted during last summer led to the discovery of more than six sites on the highway’s segment Belint-Traian Vuia. Specialists from Banat Museum have already started studying the finds. The site found in Păru village is one of the most important sites discovered so far. This site dates back to the Bronze Age (12th-13th Century BCE) as it was dated by conventional methods.

“Particularly important are the graves that shed new light on the funerary ritual at the end of the Bronze Age in north-eastern Banat. It was found that the dead were deposited on a pyre where items from the grave goods were also burned.” This included “a table-altar of clay on which they brought funerary offerings, stone grinders and various pots that were used for the funeral banquet. Modern methods of radioactive carbon dating method shows that the necropolis at Păru dates between 1300 and 1200 BCE,” Ph.D. Florin Drasovean said.

So far, it is not decided whether the site at Păru will be opened for tourists in the near future, but most probably the findings will be displayed on archaeological museums in the area.