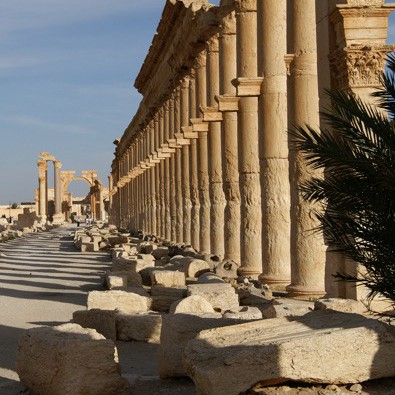 Palmyra, one of the oldest cities in Syria, has been subjected to intermittent shelling by forces loyal to President Bashar al-Assad.“Bombs and rockets come in all directions,” eyewitnesses said referring to the city’s ruins, which also consist a UNESCO’s World Heritage site.

It has been reported that Assad forces have struck the Roman Temple of Bel – built in 43 A.C. – and damaged its northern wall. The Fakhreddine II citadel, Al-Basateen and the Monumental Arch, under which Romans’ Queen Zenobia’s celebrations took place, have also suffered their fair share of destruction. Meanwhile, the city’s museum has been looted and priceless sculptures and statues are now lost.

At the same time, Palmyra, swarming with tanks, no longer hosts tourists. Its hotels, once full of curious visitors, are now empty only to harbor soldiers on their roofs.

Overall, Syria’s civil war has caused damage to six World Heritage sites in the country with shelling and open fire between opposition fighters and the regime forces. Numerous historic buildings, archaeological sites and residential areas are being left in ruins. On 30 March 2012, UNESCO called for the protection of Syria’s cultural heritage sites and expressed “grave concern about possible damage to precious sites.”