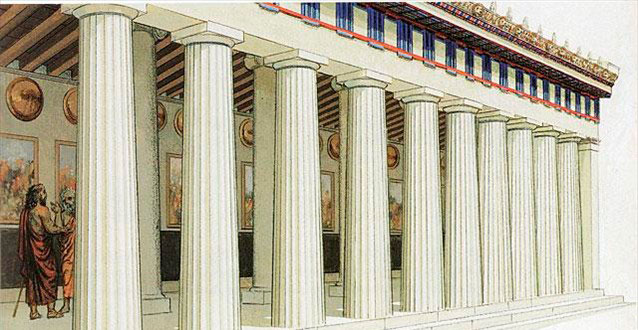 ASCSA to continue excavations at the site of Stoa Poikile

Central Archaeological Council has given the "green light"

Its walls were decorated with paintings done by the best artists of Classical Greece, showing Athenian military triumphs, both mythological and historical. Most famous, perhaps, was a picture of the battle of Marathon (490 BC) by Polygnotos. It was a popular hangout and an ideal shelter from adverse weather conditions, a gathering place where people met to have pleasant conversations and to listen to famous philosophers of Athens, such as Zeno and the Stoics. It was built between 475 and 450 BC, and was originally named the Porch of Peisianax, after the Athenian who funded its erection, probably Kimon’s brother-in-law.

The Stoa Poikile (Painted Stoa) took its name from the beautiful paintings that adorned it. Part of it has been revealed in a plot at Monastiraki by the American School of Classical Studies. The School now wishes to continue the excavations. In order to do so, the School must either expropriate or buy the plots in 20 Agiou Filippou str. and at Adrianou-Ag. Filippou streets. On these plots two buildings dating from the early 19th century stand (the only buildings left in the eastern façade of the plot), which currently host healthcare enterprises and have undergone various interventions, while their demolition will help revealing a bigger part of the ancient monument (namely part of the back wall, the inner and outer columns, the area in the front of the Stoa Poikile and partially the Eridanos river).

The Central Archaeological Council has given the green light to the request of the ASCSA, giving priority to a significant archaeological site with many monuments, which will undoubtely provide new historical evidence.