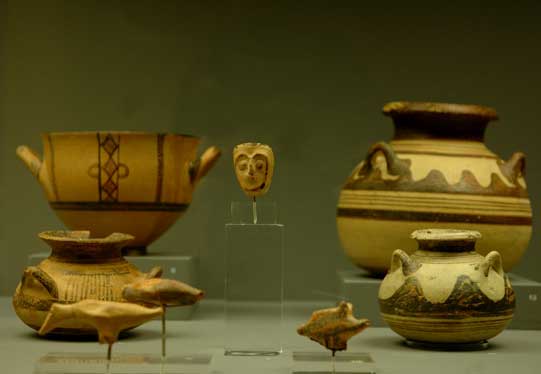 Dr Georgia Karamitrou-Mendesidi (Honorary Ephor of Antiquities) will give a lecture about the Mycenaean finds from Aiani and upper Macedonia, in the framework of the Mycenaean Seminar series.

In Aiani, at the site of Livadia, wherein lie the royal necropolis of the Archaic-Classical period and the stone-built chamber tombs, an ordinary cemetery of shaft graves from the Late Bronze Age was also uncovered. In addition to this, over 100 clusters of broken vessels were found. Most of the pieces were matt-painted while a smaller number were Mycenaean.

Out of the 38 graves a few of them were larger, for example graves 3 and 22 with the bronze swords, a feature that points to the high social standing of the buried individuals. The graves contained pottery, usually one Mycenaean (alabastron or jar) and one or two handmade vases, placed, as a rule, at the feet of the deceased. The weapons were made in bronze (swords, spears, daggers), the jewellery was made of various materials (bronze, amber, glass paste, gemstones, clay), while in the tool category are included clay spindle whorls, and in the toy category an animal ankle bone and five tiny bone arrows.

Mycenaean finds, relating to habitation layers and graves, have been unearthed in 28 sites in the Kozani prefecture. The Mycenaean presence is becoming increasingly prevalent, thus, confirming the view that Mycenaeans had established settlements of some kind in this area.

This seems especially true with regard to the area around Aiani and the middle reaches of the Aliakmon river: an area which is in close proximity to Thessaly and would, therefore, have established a network of mutual contacts and influences.

The 5th meeting of the Mycenaean Seminar will be at 19.00 in the Ioannis Drakopoulos Amphitheatre (Central Building of the University of Athens, Panepistimiou 30).