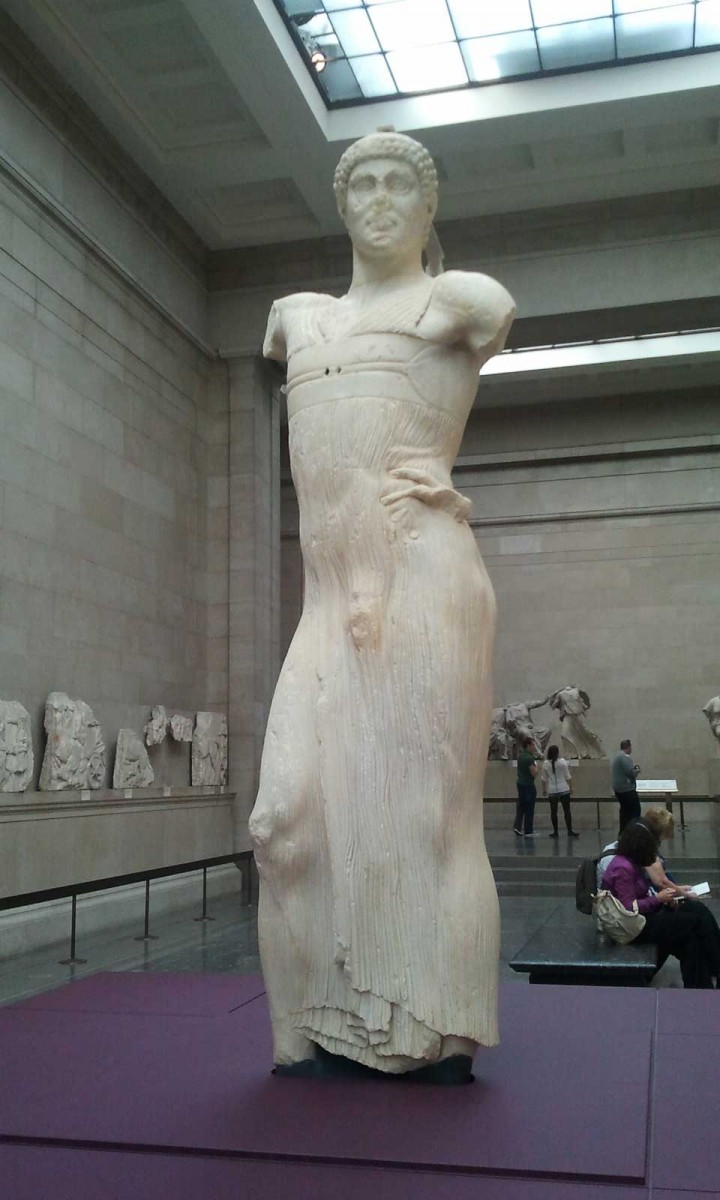 Sicily. Art and Invention between Greece and Rome

An island at the crossroads of the Mediterranean, Sicily occupied a pivotal place in antiquity between Greece, North Africa, and the Italian peninsula.

Sicily: Art and Invention between Greece and Rome, on view at the Getty Villa April 3–August 19, 2013, will showcase ancient Sicily as a major center of cultural innovation from the fifth to the third centuries B.C., when art, architecture, theater, poetry, philosophy, and science flourished and left an enduring stamp on mainland Greece and later on Rome.

“This is the first major exhibition to arise from the Getty’s 2010 Cultural Agreement with Sicily, presenting masterpieces that are among the most accomplished examples of ancient Greek art in the world,” said Timothy Potts, director of the J. Paul Getty Museum.

“We are especially thrilled to have on view the exceptional statue of a victorious Charioteer from Mozia that the Getty has recently conserved. This object is a unique expression of the marvelous artistry of Greek sculptors at the dawn of the Classical era.”

“These splendid objects bear witness to the athletic and military victories, religious rituals, opulent lifestyles, and intellectual attainments of the Sicilian Greeks, which shaped Greek culture at its peak,” explains Claire Lyons, acting senior curator of antiquities at the J. Paul Getty Museum and curator of the exhibition.

The Mozia Charioteer, widely considered one of the the finest surviving examples of Greek sculpture, serves as the exhibition’s centerpiece. Recently on view at the British Museum in London during the 2012 Summer Olympics, the statue has since undergone conservation treatment at the Getty Villa. Part of the Getty’s cultural agreement with Sicily, this 18-month collaborative conservation project involved remounting the sculpture and the provision of a seismic isolation base, which will accompany the object when it is reinstalled at the Whitaker Museum on the island of Mozia.

The triumphant Mozia Charioteer, discovered in 1976 on the island of Mozia in western Sicily, is believed to represent a charioteer who competed at Olympia on behalf of one of the Sicilian rulers. The extraordinary style of the sculpture, especially notable in the sinuous pleating of the long linen xystis that sheathes the figure’s athletic physique, is a tour-de-force of stone carving. Clearly a master of his craft, the sculptor was able to reveal the torso and limbs beneath the thin fabric. With its confident gaze and proud stance, this statue conveys the high level of originality and experimentation achieved by Greek sculptors working in Sicily.

Important evidence of Sicilian artistic innovation is also apparent in the exquisite coins of the time. Beginning in the late fifth century B.C., a group of Sicilian Greek coin engravers, mainly based in Syracuse, added their signatures to the dies used to stamp coins. Known as the “Signing Masters,” these remarkable craftsmen created extraordinary works of art on a miniature scale. Departing from the traditional profile view, they devised novel ways of representing the human body in a lively three-quarter perspective or striking frontal pose. This testimony of individual mastery of the medium is virtually exclusive to Sicilian Greek coins created around 400 B.C. Often abbreviated in tiny but legible script, the artists’ signatures are typically all but hidden in locks of hair or elements of jewelry.

Known as the “coin of coins,” the unique Aitna tetradrachm from the Royal Library of Belgium is one of the most precious ancient coins in the world. On view in the exhibition along with 50 other exceptionally crafted Sicilian Greek coins, the image on the tetradrachm depicts the head of Silenos on the obverse and on the reverse, Zeus enthroned with an eagle perched beside him, imagery that alludes to the cult of Zeus on Mt. Etna.

Greek settlers and their gods

Sicily: Art and Invention between Greece and Rome will also examine how settlers from the Greek mainland brought their myths and religious practices to Sicily. To sanctify new colonies and maintain ties with mother cities, they built altars and temples to such gods as Apollo, the patron deity of colonists, as well as the deified hero Herakles. Included are terracotta heads of Apollo, Hades, and Persephone, created as cult or votive images of deities that played a central role in ancient Sicilian worship. The skillfully modeled clay, embellished with striking polychrome pigments, compares favorably with the most accomplished works in marble and bronze. An exceptional example of metalwork is a religious offering dish made of two and a half pounds of gold. Known as a phiale mesomphalos, the vessel is embossed from the center outward with bands of beechnuts, acorns, and bees above blossoms; the owner’s name —Damarchos, son of Achyris— is inscribed beneath the rim, together with its equivalent weight in gold coins.

The divine hero Herakles was also embraced by Greek settlers, who linked his deeds to their cities. Contrasting aspects of Herakles’ identity —peaceful healer, solitary herdsman, and violent aggressor— heightened the appeal of his cult among the men of rural Sicily, who tended flocks and worked as mercenary soldiers. Among the objects on view is a finely preserved bronze statuette of Herakles recovered from a river-bed in Contrada Cafeo (Modica), which suggests that a shrine to the hero was situated nearby.

Preeminent among the honored deities was Demeter, goddess of agriculture, and her daughter Persephone (or Kore). Sanctuaries of the goddesses dotted the island, but their cult was most enthusiastically embraced in central Sicily, where, according to myth, Kore descended to the Underworld as the bride of Hades. Depictions of these deities include a terracotta bust with a rare painted figural scene that may represent part of a ritual honoring or celebrating the goddesses, and a cult statuette disc overed near an altar in Gela together with an offering jug of carbonized seeds of grain.

A section of the exhibition will focus on Archimedes of Syracuse (about 287–212 B.C.), one of history’s foremost scientists and mathematicians. More than a millennium ahead of its time, his work laid the foundation for branches of math, physics, engineering, and even computer science. When Syracuse’s King Hieron II asked him to determine whether a crown was made of pure gold, Archimedes made his legendary deduction that a solid displaces a volume of liquid equal to its own volume, a discovery that supposedly caused the scientist to leap from his bath and run naked through the streets crying “Eureka” (“I have found it!”).

On view is a leaf from the Archimedes Palimpsest, the only surviving manuscript containing copies of Archimedes’ writings. The medieval prayer book that included this leaf was inked by a scribe onto recycled parchment that originally bore the theories of Archimedes. The pages were scraped clean before being overwritten, but with the use of advanced imaging technology, the original writing is visible. The leaf on view is a section of text from “Proposition 1” from Archimedes’ Method, a work integrating geometry and physics.

Finally, the exhibition examines the reflections of literature in Sicilian visual arts. Many mainland Greeks became familiar with Sicily through the epic poetry of Homer, including Odysseus’s wanderings after the Trojan War, which took him to the western Mediterranean.

Often depicted in vase-painting and sculpture, Odysseus’s encounters with strange creatures like the Cyclops and Scylla were allegories for early colonial settlement and trading enterprises that spread Greek culture to distant, exotic regions. The pastoral genre created and perfected by the Syracusan poet Theokritos (about 300–after 260 B.C.) flourished as Sicily was falling under the dominion of Rome in the third century B.C. He is renowned for his Idylls (literally, “little pictures”), which paint nostalgic word-images of Sicilian country life from the point of view of a sophisticated urbanite. Theokritos’s rustic characters—including satyrs, shepherds, and the woodland deity Priapos—also populated the visual arts of the period, attesting to the appeal of rural fantasies during a time of civic turmoil. On extended loan from Syracuse, a life-size statue of the fertility god Priapos, the earliest such figure in Greek art will be featured in the exhibition. Like the Mozia Charioteer, it was also the subject of a collaborative conservation project undertaken by the Getty Museum.

The importance and popularity of Greek comedy and drama outside of Athens is evident in the theatrical figurines, masks and scenes on vases, many of which come from the island of Lipari. The celebrated “Father of Tragedy,” Aeschylus (Greek, 525–456 B.C.) traveled to Sicily on at least two occasions, where his plays found fertile ground in the strong local tradition of performance on the island.

On display is a terracotta mixing vessel with the earliest known depiction of the myth of Perseus and Andromeda, which likely reflects a performance of Sophocles’ Andromeda (about 450 B.C.). The Greek inscription painted above the figure of Perseus—“Euaion, the son of Aeschylus, is handsome”— names the actor, son of the great tragedian.

Rich harvests, bountiful seas, and a favorable trade location brought immense wealth to the Sicilian city-states, and the exhibition highlights their widespread reputation for luxurious lifestyles with five gilt-silver vessels, part of a larger group of fifteen. The silver treasure had been buried for safekeeping beneath the floor of a house in Morgantina during the Roman sack of the city in 211 B.C. The entire hoard comprises religious vessels as well as a set for the symposion, a convivial drinking party for men that was an important part of the social life of well-to-do Greeks.

Sicily: Art and Invention between Greece and Rome is the latest in a series of cooperative efforts between the Getty and the Sicili an Ministry of Culture and Sicilian Identity arising from a 2010 agreement that calls for a number of collaborative projects, including object conservation, seismic protection of collections, exhibitions, scholarly research, and conferences. Recent related projects include the 2010 loan of the Gela Krater, a monumental red-figured volute krater (wine mixing vessel) attributed to the Niobid Painter; The Agrigento Youth, a rare example of an early classical marble statue called a kouros (an idealized nude young man), loaned to the Getty from the Museo Archeologico Regionale in Agrigento (2010/2011); and most recently the loan of thirty-six objects from the sanctuaries of Demeter at Morgantina (2012/January 2013).

The exhibition is co-organized by the J. Paul Getty Museum, the Cleveland Museum of Art, and the Assessorato dei Beni Culturali e dell’Identità Siciliana, and celebrates 2013 as the Year of Italian Culture in the United States, an initiative of the Italian Ministry of Foreign Affairs, realized under the leadership of the President of the Republic of Italy.