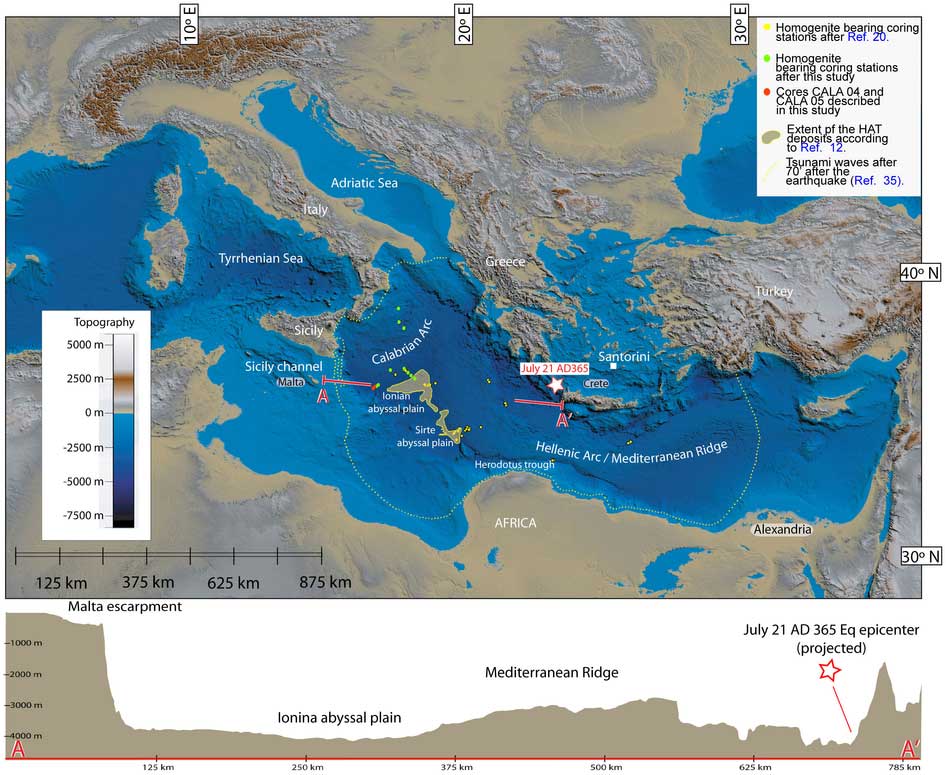 Tsunami in the Mediterranean

“Historian Ammianus Marcellinus documented the devastating effects of a tsunami hitting Alexandria, Egypt, on July 21, AD 365. “The solidity of the earth was made to shake … and the sea was driven away. The waters returning when least expected killed many thousands by drowning. Huge ships… perched on the roofs of houses… hurled miles from the shore….”

Other settlements around the Mediterranean were hit at roughly the same time. This scenario is similar to that of the recent Sumatra and Tohoku tsunamis. Based on geophysical surveys and sediment cores from the Ionian Sea we show that the 20-25 m thick megaturbidite known in the literature as Homogenite/Augias was triggered not by the Santorini caldera collapse but by the 365 AD Cretan earthquake/tsunami. An older similar megaturbidite was deposited after 14.590 ± 80 yr BP, implying a large recurrence time of such extreme sedimentary events in the Mediterranean Sea”.

A team under the scientist Alina Polonia from the Institute of Marine Science (ISMAR) has conducted a research and published its findings in the Scientific Reports journal of the Nature group. The researchers came to their conclusions after analyzing a large amount of geophysical and geological data, including high-resolution acoustic images of the sedimentary deposits and samples of the sediment taken from the deep sea bed at almost 4,000 m below sea level.