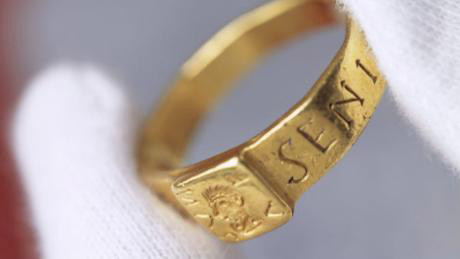 The "One Ring to rule them all" was actually Roman?

Could a cursed Roman ring have inspired the writing of The Hobbit? It had been thought that JRR Tolkien was inspired by the Niebelung legends, but an exhibition at The Vyne, a sixteenth-century home built for King Henry VIII’s Lord Chamerlain, explores the possible link between a Roman gold ring and author.

Originally discovered by a farmer in the late eighteenth century in what the Guardian terms “one of the most enigmatic Roman sites in the country,” the ring was presumably sold to the family who owned the great house the Vyne.

It was a strikingly odd object, 12g of gold so large that it would only fit on a gloved thumb, ornamented with a peculiar spiky head wearing a diadem, and a Latin inscription reading: “Senicianus live well in God.” A few decades later and 100 miles away, more of the story turned up: at Lydney in Gloucestershire, a Roman site known locally as the Dwarfs Hill, a tablet with an inscribed curse was found. A Roman called Silvianus informs the god Nodens that his ring has been stolen. He knows the villain responsible, and he wants the god to sort them out: “Among those who bear the name of Senicianus to none grant health until he bring back the ring to the temple of Nodens.”

Here’s where Tolkien comes in. In 1929, archaeologist Sir Mortimer Wheeler consulted with him as an Anglo-Saxon scholar, about the ring and the unusual name of the god mentioned in the curse. The Hobbit was published in 1937.