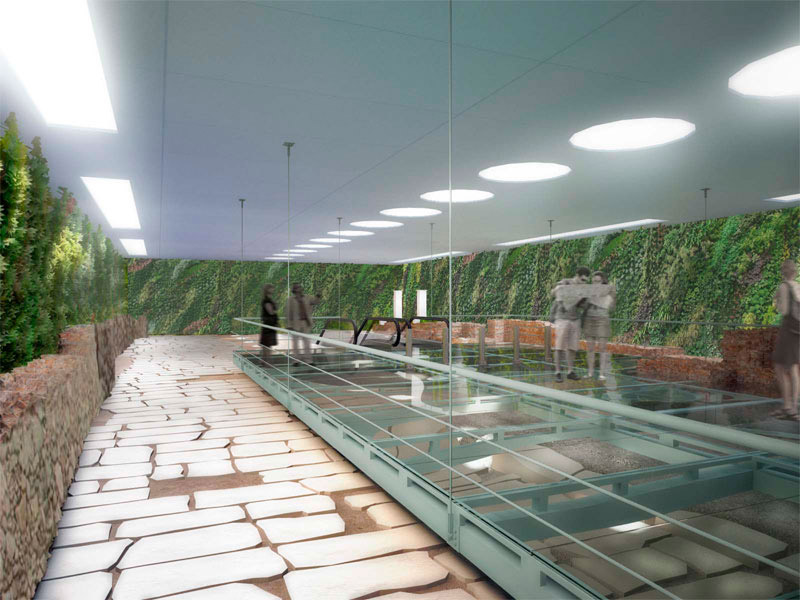 A two-in-one solution for the Venizelou antiquities

The Technical Chamber of Greece proposal

A two-in-one solution for the Byzantine antiquities revealed when digging for the Venizelou underground station  in Thessaloniki was proposed by the Technical Chamber of Greece (Section of Central Macedonia). The 8-member working group organized by the Chamber has ended up to a proposal in order to achieve what was seen -so far- as inpracticable. To keep the antiquities in situ  with the station in use.

The proposal, which has initially been accepted by the construction company Attiko Metro Ltd, includes the temporary removement of the finds during the station’s construction and their almost (85%-95%) restoration in situ after the station is completed.

The proposal has been presented today during a press conference. According to the civil engineer Parisis Mpillias, a member of the Chamber’s government comittee, the solution proposed has a low cost (0,6% – 0.8% of the budget) while, in case all related parts are to cooperate well, there will be zero or only a few months delay to the works’ completion.

According to the proposal, the antiquities will remain in situ, with the exception of a 45 sq.m.  space  (out of the area’s 1.600 sq.m.), where vents and escalators will be made.

The antiquities will be accessible to the underground passengers both visually and kinaethetically, through an open-space sense due to the natural light, the ceiling lights and the plants surrounding them.

The Chamber team is actually proposing the common urban planning both of the connections and the surrounding space at the Venizelou station (which develops at six levels, five underground and one ground floors), aiming to the overall regeneration of the area.

The ancient street surviving at Venizelou is to be a part of a gereral urban ensemble materialized as an underground square joining together the streets and monuments nearby. This ensemble can be an open-air museum and a unique example of urban space regeneration in Thessaloniki.

According to Mr. Mpillias, the Chamber team ended up to this proposal bearing in mind that the Thessaloniki underground cannot operate without the Venizelou station, as this is one of its core stops due to its position in the heart of Thessaloniki. At the same time, the station in close proximity to significant monuments (such as the Alcazar, Bezesteni, the Ebrar Market, the Deladetsimas’ Old Town Hall) and it is expected that in 2030 it will be accessed by 85.000 passengers daily.

The solution has been characterised as “Technically plausible in the first place” by the Thessaloniki Metro general manager Yiorgos Konstantinides, also stating that there will be a need for further study in order to make actual decisions.

“Attiko Metro Ltd is bound to face the proposal seriously and, if this qualifies and there are similar decisions on behalf of the competent authorities, it will be probably up for application”.

– The first underground level of the station is to have the character of a square/passage.

– The area’s environmental re-planning is to be materialized by planting, using eco-friendly materials and shadow-sunlight compositions and re-using historical and mid-war buildings.

– The restoration is completed through the overall re-planning of the Venizelou/Dragoumi str. axis. Pavements are becoming broader, the driveway is becoming narrower, the area is getting greener and there are routes conecting monuments and other significant buildings.

According to the Chamber’s president for Central MacedoniaTasos Konaklidis, the plan is to be handed in to the competent authorities, as the Chamber itself is not willing to be responsible for any additional delays to the construction.