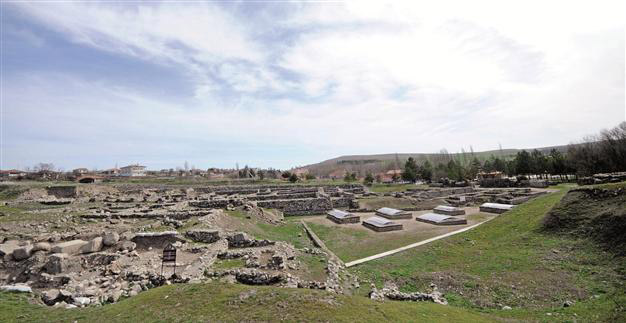 Hittite site to be turned into ‘tourist attraction’

Alacahöyük is set to be given new facilities

Turkey’s  ancient site of Alacahöyük (Çorum province) is set to be given new facilities reflecting traces of the Hittite civilization.

“Ministry officials and representatives of the company that prepared the project came to Alacahöyük and conducted inspections in areas where the project will be implemented. With this plan, the protection area of the ancient site will be widened,” said the head of the Alacahöyük excavations, Professor Aykut Çınaroğlu, who estimates that the reconstruction plan for the site’s protection, prepared by the Culture and Tourism Ministry, is set to be implemented in a year.

Prof. Çınaroğlu added that some areas at the site, which currently draws around 50,000 visitors a year, would be launched as first degree archaeological areas. A meeting with members of the public also took place recently, in order to exchange views about the project. “The execution area of the project was discussed at the meeting, which was attended by ministry officials, the mayor, the museum director, and citizens. The project is careful to prevent the suffering of citizens who have rights in the area and a road map was determined by taking views from all sections,” he said.

Region to become center of attraction

As for the new arrangements and investments to be made in the region, Prof. Çınaroğlu said visitors to Alacahöyük would also be able to appreciate the culture of Hittite and Hatti civilizations.

“Alacahöyük, which dates back 4,500 years to the Chalcolithic period, was one of the most important centers of the Hittites. It has a magnificent gate with a sphinx, as well as religious and official structures, and it was also home to the first dam in Anatolia. This place is like an open air museum. The Alacahöyük excavations, which started in 1907 in the Ottoman period but only lasted for a very short time, continued in 1935 upon the order of Mustafa Kemal Atatürk with the support of his own money. It thus gained the ‘first national excavation’ title,” he said.

Prof. Çınaroğlu added that radical changes would be made to the site, with the gate changing and a new route being prepared for visitors. “Visitors will be welcomed by examples from Hittite and Hatti culture. There will also be a car parking place for 100 cars, a camping area, and gift shops. New facilities will be built to turn the area into a tourism center”.