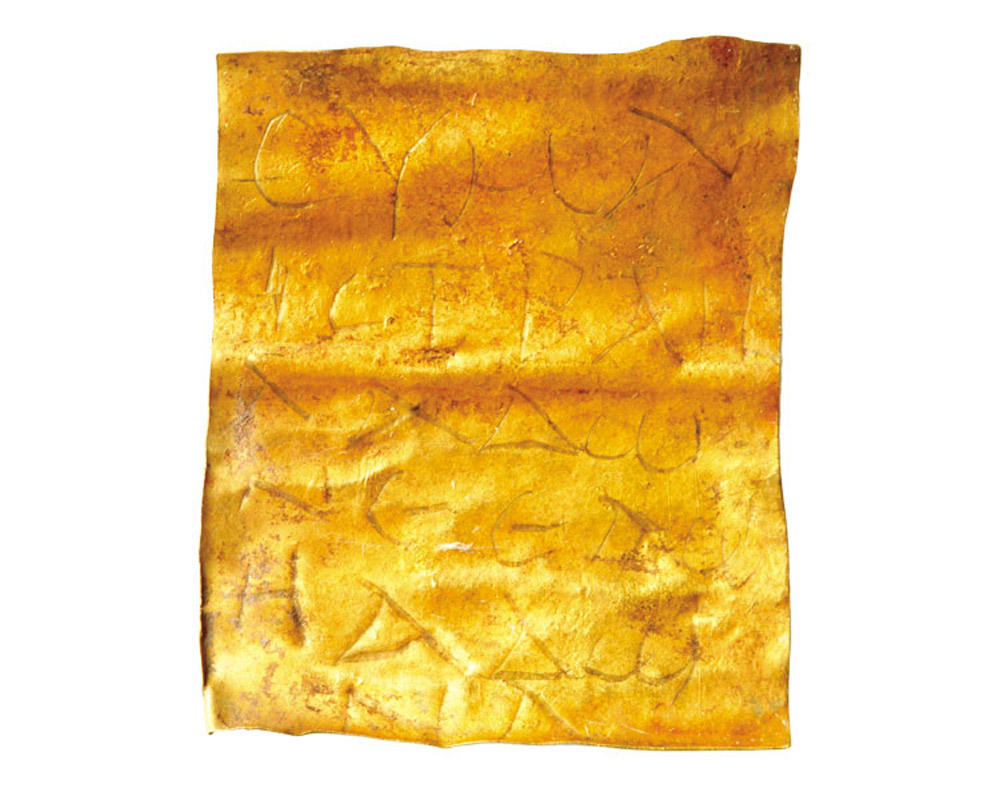 “Hear O Israel, the Lord our God, the Lord is one”. This is how researchers Armin Lange and Esther Eshel interpret the inscription found on an amulet discovered in a third-century C.E. child’s grave near the Roman frontier city Carnuntum (close to modern Halbturn, Austria).

The phrase read in the inscription, known as “Shema‘ Yisrael” (Deuteronomy 6:4) is Judaism’s holiest confession. Today, we understand the passage as a monotheistic declaration. However, in the Second Temple period, the Shema‘ Yisrael text in Deuteronomy would have been read “Hear, O Israel! The Lord is our God, the Lord alone.”

The Shema‘ Yisrael was originally a monaltric statement; it stated that Israel had an exclusive relationship with its God, but it did not deny the existence of other national deities for other peoples. But the statement as seen in the Carnuntum amulet is monotheistic: it proclaims the faith in one God by denying, at the same time, the existance of anyone or anything similar to Him.

The amulet is formed out of a silver capsule and small gold leaf, inscribed with a Hebrew Shema‘ Yisrael written in Greek letters. Lange and Eshel state that “the Jewish amulet reads the last clause of the Shema‘ Yisrael as ΑΔΩΝ Α ‘the Lord is 1.’ That is, it replaces the Hebrew word אחד, which meant originally ‘alone,’ with ‘one’ (a Greek A). The letter in ancient Greek represents the numeral 1.”

According to the two researchers, Carnuntum had a well-integrated Jewish population that stated their religion openly. The Jewish population would have known how to recite the Shema‘ Yisrael, but most likely did not know how to write in Hebrew.“To our knowledge the Halbturn amulet is the first text that renders the Hebrew word ehad (אחד) with the number “1.” This numerical representation of the final word of the Shema‘leaves no doubt about how the Jewish craftsman who made the Halbturn amulet understood the Shema‘ Yisrael —as a monotheistic statement! Only the Lord is God; there is no other God. Though the Jews of Carnuntum were open to the multi-religious culture of their city, this openness clearly had defined limits. For them, no other god existed but the Lord”, they conclude.