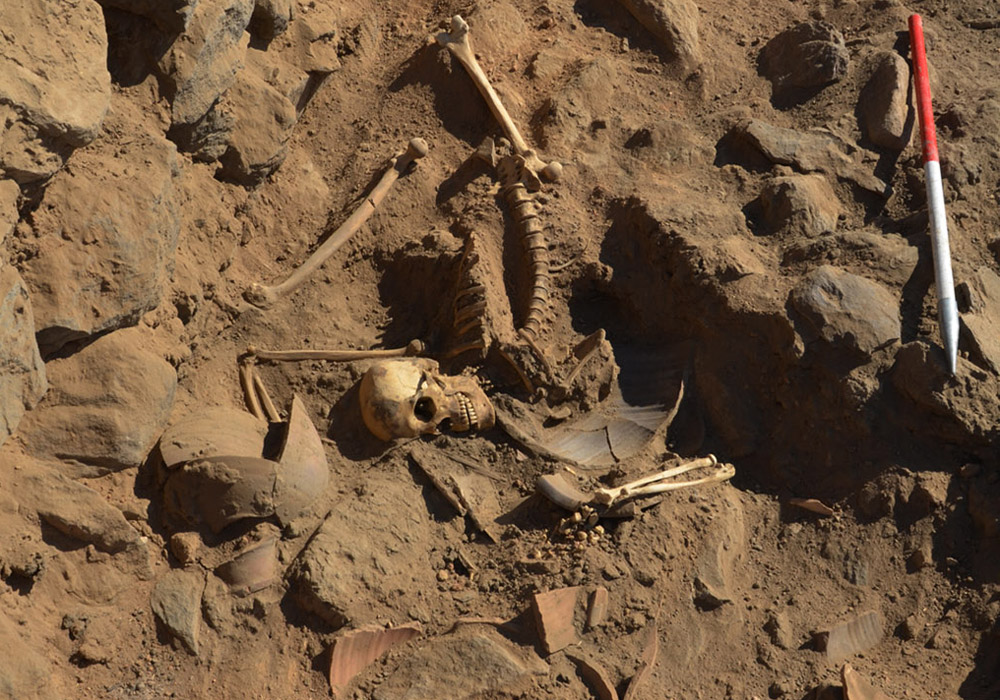 A skeleton of a soldier with Nubian characteristcs was discovered during excavations in the Early Byzantine fortress site of Hisn Al-Bab, south of Aswan, in Egypt.

According to a formal announcement by the newly appointed Minister of State for Antiquities Dr. Ahmed Essa, the skeleton was brought to light within a residential construction of Heracleian Dynasty date (610-695 AD) by the Austrian Archaeological Institute’s mission (dir. by Dr. Irene Forstner-Müller). As reported, the skeleton is in good condition. It demonstrates that the man, who died at the age of 25 to 35 years old, was of Nubian origins and had served in the army for a long time. He seems to have passed away stabbed at the groin, while his burial seems to had taken place immediately after death.

Still, according to Adel Hussein, Director of the Ancient Egyptian Antiquities department, the mission couldn’t determine the time of the outbreak of this particular conflict where the man died. However, preliminary evidence suggests it occurred shortly after the Arab conquest of Egypt.

The fortress at Hisn al-Bab had been a significant border point between Egypt and Nubia. After the Arab conquest it served as a spot where the Nubians were to provide the “baqt”, a number of goods as a kind of tribute to the Arab masters of Egypt, in order to secure peace. So far, two separate phases were identified at Hisn al-Bab. The identification of an earlier, Early Byzantine, fortress of the 6th-7th century was unexpected. This fortress included a large enclosure on the gebel top, walls running down the slope to the river under the later fortress, and areas of what appear to be habitation within the walls. The later fortress, presumably that of al-Qasr, and thus well known from texts, was very well preserved architecturally but surprisingly left almost no other material remains on the surface.