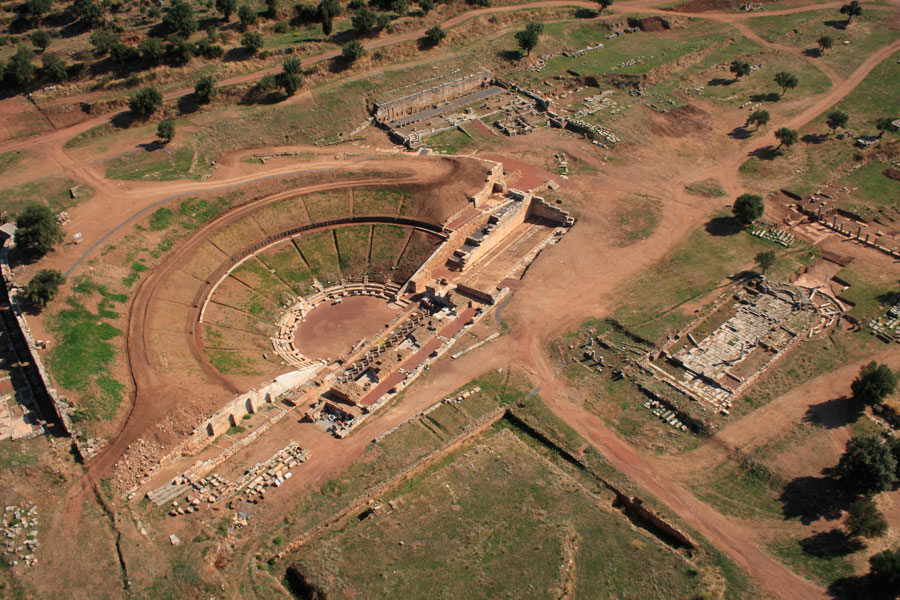 The ancient theatre of Messene re-opens

For more than 600 years, the ancient theatre of Messene hosted cultural and political events. Great men of the past found themselves in its spaces, such as the king of Macedonia, Philip V and the skilled general of the Achaean League, Philopoemen from Megalopolis. After 1,700 years of neglect and silence, the ancient theatre of Messene re-opens its doors for the public, this summer.

The restored theatre will be inaugurated on August 3rd with an opera gala, organized in the framework of the Greek Festival, performed by Athens State Orchestra, conducted by Giorgos Kouroupos. Soloists Dimitris Platanias and Tselia Kostea will participate. The event is organized in cooperation with the “Diazoma” Association.

The ancient theatre of Messene re-opens this year for the first time since 300 AD, when it closed down. After operating for six centuries, the theatre was abandoned, it declined and eventually succumbed. Characteristic for the apathy of the residents of the area regarding its fate is the fact that during Byzantine era, they removed many of the seats and used them as building material for temples and houses.

“When we first started the excavations, we found ourselves discouraged. The theatre was practically non-existent, the only thing left were some barrier walls and the olive groves surrounding it (…). Huge earth deposits covered the orchestra and the koilon” says Petros Themelis, head of the excavations.

The restoration of the ancient theatre lasted more than 20 years. The archaeologists managed to re-unite the scattered pieces and put back to their places more than 2,000 seats.

Works at the koilon (cavea) have not been completed yet. They will continue after the summer. Until August 3rd the theatre is expected to be restored up to its 15th row. During the event, 2,500 spectators will be hosted at the theatre. After the completion of restoration works, its capacity is estimated to reach 5,000 seats, which is half the capacity it had in antiquity.

Isn’t Petros Themelis worried by the presence of so many people in a theatre which has remained closed for centuries? “The only damage is caused by women’s high heels” the archaeologist says. He believes that the purpose of a theatre is to be used, not remain closed. “The risk of damages comes through time not people” he adds.

Mr. Themelis’ vision is that the theatre and the ancient city will host lots of events all the time. He argues that if the monument isn’t going to revive, there is no point in excavating. “We want the theatre to operate for events, schools, conferences. We want all areas of ancient Messene to operate in a multifaceted manner. We want the whole city to become alive, to be related to society and the institutions” he stresses.

The ancient theatre of Messene is located at the northwest of the archaeological site of Messene. Its first building phase is dated to the 3rd century BC. The walls of the scene, the proscenium and the orchestra were repaired during the 1st and 2nd century AD. The theatre was used for entertainment events and as a gathering place for political purposes. In the theatre of Messene the king of Macedonia Philip V and Aratus of Sicyon met in 214 BC, a day after the riot of the people and the slaughter of the city’s officials and 200 rich citizens. According to Livius, many citizens of Messene gathered at the theatre demanding that general Philopoemen from Megalopolis would be brought there in plain sight, after being captured by the Messeneans in 183 BC.

The koilon rests on an artificial deposit made of a strong semicircular retaining wall. The high pointed posterns and the staircases mounting to the highest levels give the impression of a fortress structure. These elements and the fact that the retaining wall was visible and accessible from outside render the theatre of Messene unique in its kind and a precursor of the colossal theatres and amphitheatres of the Roman era.