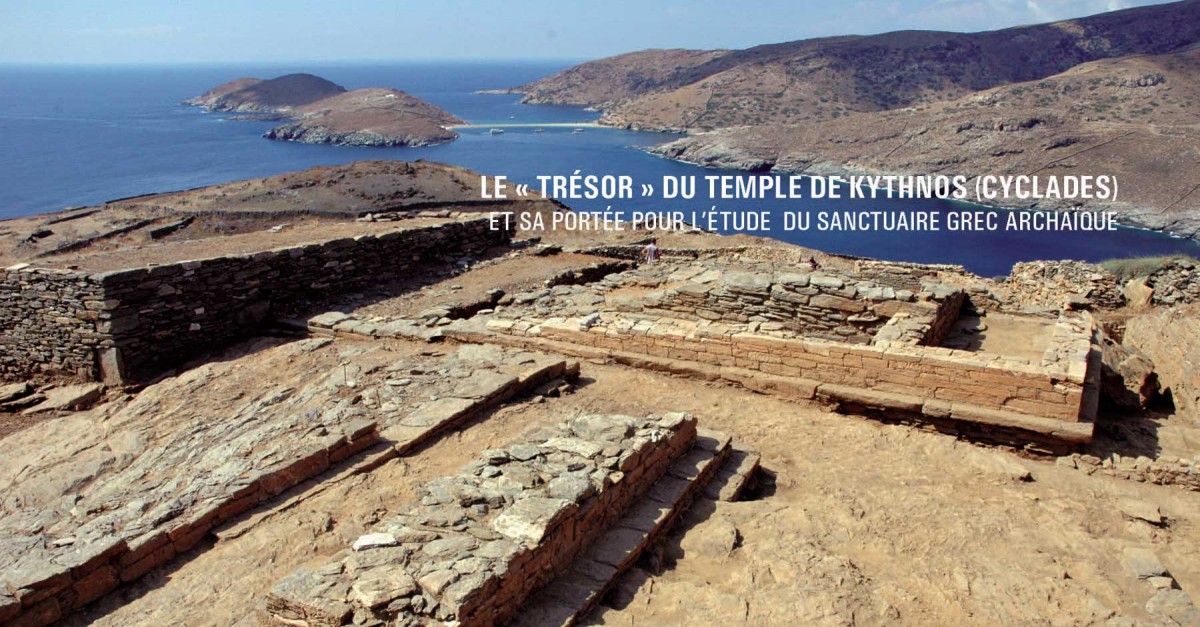 Alexander Mazarakis Ainian, Professor of Classical Archaeology (University of Thessaly) and holder of the Blaise Pascal International Chair (Paris) will give a lecture on “The ‘Treasure’ of Kythnos and its contribution to the understanding of the Archaic Greek sanctuary”, as part of Les Journées nationales d’Archéologie, organized by L’Université de Paris I Panthéon-Sorbonne, L’Ecole du Louvre.

In 2002 and thereon until 2006, on the site of the ancient capital of the Cycladic island of Kythnos, today called Vryokastro, the team of the University of Thessaly led by Professor Alexander Mazarakis Ainian, made an important discovery, the unplundered inner sanctum (“adyton”) of a temple, dated in the Archaic period. This back room was full with offerings in precious metals, mostly jewels, and a great variety of luxurious objects, dated mostly from the seventh to the early fifth centuries B.C., though certain objects date back to the Early Iron Age and there were also “antiques” dating to the Late Bronze Age. The finds in the “adyton” were perhaps re-positioned there during the Hellenistic period, following a damage of the temple by an earthquake. A second violent destruction some time later led to the final collapse of the edifice and the preservation of its contents up to the present day.

The opulence of the finds both from within the temple as well as from the large votive deposit discovered nearby is impressive. The offerings, mostly jewels, were of gold, silver, bronze, bone and ivory, carnelian, rock crystal, glass paste, faience, amber, semi-precious stones etc. A number of imports from all over the Aegean World, as well as the East and West Mediterranean (Phoenician, Egyptian, South Italian) were also found. Among the finds there were significant numbers of terracotta seated female figurines. The pottery was broken though several vases were intact, coming from various production centres of the Aegean (the Cyclades, East Greece and Ionia, Corinth, Athens and Attica). Some of the Athenian black figure vases may be linked to master painters.

Judging by the character of the finds and the architectural layout of the sanctuary (double sacred “oikos” and two altars standing on the side next to it) the cult may have been addressed to two divinities. Apollo and Artemis are likely candidates (this hypothesis is also supported by a few graffiti, which however are not conclusive). The study and publication which are well under way will contribute towards a better understanding of ancient Greek cult practices.

The double temple with its two altars stood on a massive terrace which on its turn was bordered by a monumental terrace wall, more than 60 metres long. The latter may belong to the Hellenistic period and seems to mark the monumental reorganization of the entire upper plateau of the ancient city, allowing large-scale communal gatherings. It cannot be excluded that the Agora of the Kythnians was situated here. This idea is further strengthened by the discovery and excavation (from 2009 onwards) a few metres lower down the slope of a large public edifice dated in the late Classical and Hellenistic period. The architectural layout and the finds, which include votive offerings and official lead weights and measures of the Kythnians, suggest that the edifice may have been a Prytaneion.