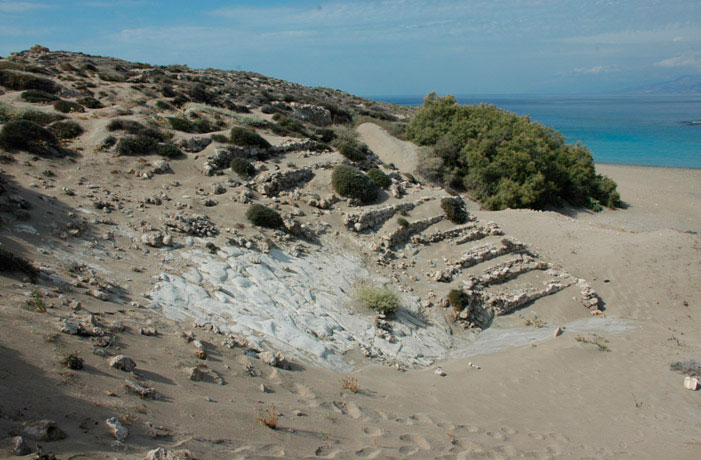 Fundraising for a theatre buried in the sand

Lefki in the Libyan Sea

Koufonisi is a small island in the Libyan Sea just off the South East coast of Crete and the Cape of Goudouras. It is also named Lefki (“white”), so called because of its white rocks and sand, limestone being the dominant type of rock there. There is a cluster of small islets in the area like Makroulo, Strogylo, Trahila and Marmara. The island is deserted, mostly covered with sand reminding an African landscape. Until 1976 the shepherds used to graze their sheep there but it was not inhabited. Later archaeologist N. Papadakis began excavations on the island, which proved to be full of ancient sites. One of the finds was the ancient theatre of Lefki.

The theatre of Lefki was built in the 2nd century AD and has a capacity of 1,000 seats. Its koilon has 12 seating rows and an almost perfect semi-circular shape. The orchestra is slightly bigger than the semicircle. The scene building consists of the proskenion (logeion), the hyposkenion and the paraskenia, and there were two side vaulted entrances into the theater. Today the theatre lies buried in the sand.

Now, the “Vitsentzos Kornaros” Progressive Association of Sitia and the Association “Diazoma” have launched a campaign to inform people about the theatre, and encourage them to help rescue and restore the ancient theatre of Lefki.

So far, several steps have been undertaken towards rescuing the ancient theatre. The former Prefecture of Lasithi in Crete funded a geophysical survey of the ancient theatre. The survey was conducted by the Institute for Mediterranean Studies of the Foundation for Research and Technology, Hellas (FORTH). After the survey has been completed, works for the rescue and protection of the theatre started by the 24th Ephorate of Prehistoric and Classical Antiquities. Architects George Kannavakis and Liana Efthimiadou have already offered volunteer work for completion of a study for the protection of the monument from heavy weather conditions and natural sandblasts caused by heavy windstorms.

In order to facilitate the process for citizens who wish to contribute to the rescue of the ancient theatre, DIAZOMA has set up a special bank account, a ‘money box’, for the theatre, in which every citizen, according to their means, will be able to deposit their contribution for the study, excavation, conservation, restoration and functional incorporation in today’s society of the specific ancient theatre. The budget for the necessary works at Lefki is 20,000 euros.