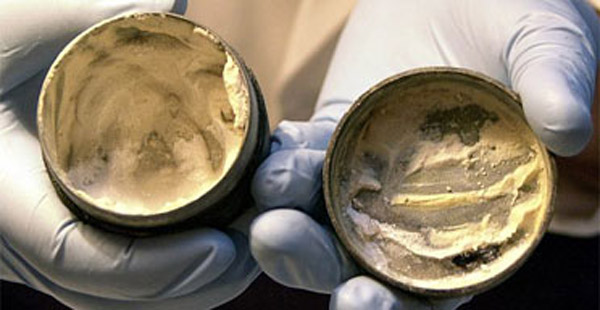 The imprints could shed further light on whether the pot was used by an adult or child, male or female.

A sealed Roman container was opened today to reveal a 2,000-year-old cream – complete with fingerprints. The metal artefact, measuring 6cm in diameter and showing little sign of decay was unearthed during archaeological excavations at a Roman temple complex in Tabard Square, Southwark, London.

The pot, of exquisite quality and bearing circular grooves on the outside, is made almost entirely of tin. As for the cream, which now has a sulphurous odour, is yellowish-while and researchers are puzzled on its use: medical, cosmetic or ritualistic.

“It appears to be a kind of cosmetic cream or ointment. Creams of this kind do not ordinarily survive into the archaeological record, so this is a unique find.”, says Garry Brown, managing director of archaeological group Pre-Construct Archaeology. “We know that the Romans used donkey’s milk for the skin, so scientific analysis will be very revealing”, said Francis Grew, curator at the Museum of London, who has also stated the opinion that the cream could be a face paint applied as part of ritual ceremonies, as it has been found in a temple site. “Only two similar containers, both without lids, have been found in London and both were in market sites,” added Elizabeth Barhan, conservator at the Museum of London. It has to be added that this is the first sealed container that comes to light.

“It is a fantastic human element to find the finger marks on the inside of the lid,” said Nansi Rosenberg, senior archaeological consultant at EC Harris, the consultancy which is managing the excavation. The imprints could shed further light on whether the pot was used by an adult or child, male or female.

The box and its contents will be immediately placed on display at the Museum of London, along with other key finds. Now that the excavation work has been completed, the site will not be preserved. The prime London site, owned by Berkeley Homes, will become a residential development.