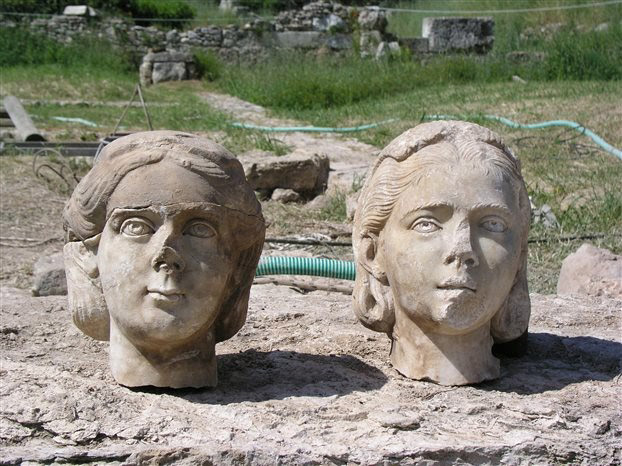 Impressive finds coming out of a well

Two marble female heads, dating from the 3rd Century AD, were discovered during the works of the German Archaeological Institute at Kerameikos. The findings were revealed during the cleaning of a well, which belongs to a bath of the Classical era and is near the Dipylon Gate.

Having received the permission to clean the well by the Archaeological service, the head of the institute for excavations, Utah Strotsek, used four pumps to remove the water. The two bust came across during the procedure.

The finds are in a very good condition. Still, two massive strikes on their surface indicate that someone hit them hard in order to break them and then threw them into the well.

According to Utah Strotsek, the busts were dated based on the style of the headdress. Their hair is reminiscent of Salonina, wife of the Emperor Gallienus and mother of Valerianus, who is depicted on the coins of the era.

The well itself was an impressive construction, stone built and is coated with hydraulic lime-mortar of excellent quality. It was believed to have been in use for 800 years during the 5th-6th century AD).

The German Archaeological Institute, which celebrates its 100 years of excavations in Kerameikos this year, has started a new program of restoration and conservation of the monuments of Kerameikos. Except for the bath and its well, the works involve the Sacred Gate, funerary monuments and a temple of goddess Artemis and the restoration of the unique little temple of Agathon, which is held in cooperation with the Archaeological Service.