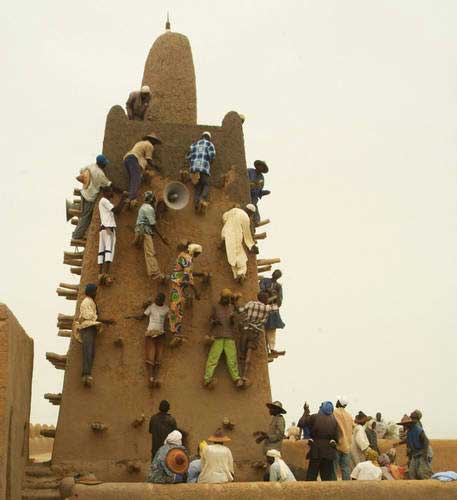 The Djingareyber Mosque in Timbuktu received a new façade this month as activities began in earnest to rehabilitate the city’s cultural heritage. The start of the repair work followed a visit to the site from August 14 to 16 by Bruno Maiga, Mali’s Minister for Culture, and experts from UNESCO’s Bamako office.

The Djingareyber Mosque is the largest of three mosques at the World Heritage site and shelters two of the 14 mausoleums destroyed by the groups of armed rebels that occupied the city earlier this year. No maintenance work could be carried out on the earthen structure during the occupation, heightening the risk of serious degradation.

Along with the rendering work on the mosque, a series of architectural studies were started and costs estimated for the reconstruction and rehabilitation of other damaged cultural property in the city. These tasks are being undertaken by Malian architects and technicians employed by the Ministry of Culture, under the National Cultural Heritage Directorate, with financial support from UNESCO.

The work on the mosque is one of a range of activities to rehabilitate all of the destroyed mausoleums, the El Farouk monument, the Ahmed Baba Manuscript Centre and other cultural property and intangible cultural heritage. Local communities are being closely associated with all phases of this work.

“The Government of Mali and UNESCO are working to restore the monuments and mausoleums of Timbuktu. The mission this month gives us confidence that the promises made, will be kept,” said Abderahamane Ben Essayouti, Imam of Djingareyber.

The August mission follows an assessment of the site last June, undertaken by Malian authorities and UNESCO experts at the request of UNESCO Director-General Irina Bokova, that revealed the full extent of the damage to Timbuktu’s cultural heritage, including its collections of ancient manuscripts.

The start of repairs and reconstruction is of great symbolic importance for the people of Timbuktu, marking the end of a period characterized by the destruction of city’s monuments and manuscripts, and the prohibition of cultural practices and expressions.