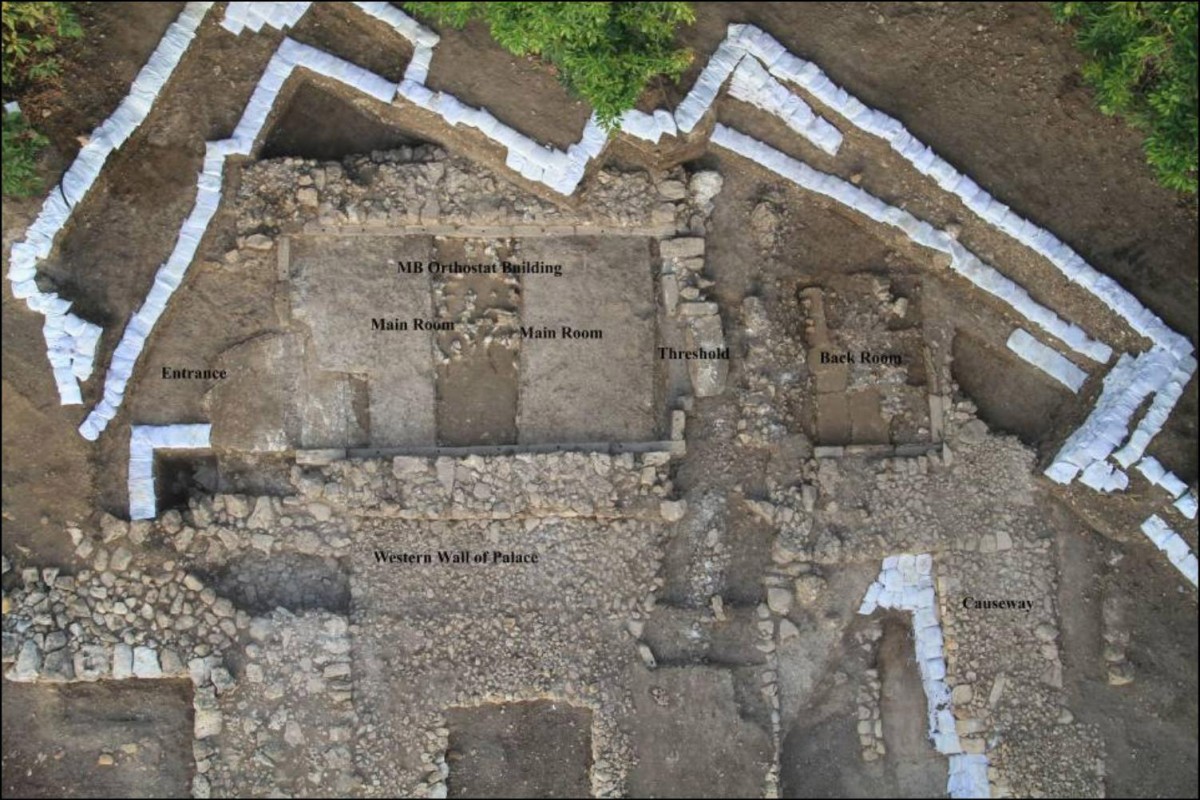 The 2013 excavations at Tel Kabri, the capital of a Middle Bronze Age Canaanite kingdom located in the western Galilee region of modern Israel, lasted from 23 June to 1 August 2013. Highlights of the season included the discovery of a complex composed of several rooms (one filled with nearly forty storage jars), additional fragments of painted wall plaster and an additional large hall and rooms with plaster floors belonging to the palace creating a 75-meter-long continuum of uninterrupted monumental architecture.

As stated in the official excavation report, during the 2013 season, the scholars’ efforts were concentrated in three main areas: 1) Area DWest; 2) Area D-South1 (DS-1); and 3) Area D-West East (DWE).

On Area DWest, the team excavated the area adjacent to the so-called Orthostat Building which had been discovered during the 2011 season. The area is also characterized by the existence of a palatial complex, of which the team aimed to locate the western edge. Instead, the team located a palatial storage complex as well as several fragments of red-painted wall plaster within the stones of the western wall of the Orthostat Building. For the fragments, the research suggest that an earlier structure in this area had its walls covered with red-painted plaster, of which these fragments are the remnants, but this remains to be investigated in a future season. As for the palatial storage complex, the results are described below.

The complex had at least two rooms. The northern room had an entrance from the northwest, which consisted of four walls (piers) and two chambers. During this season, only the eastern chamber of the entranceway was excavated. Still, this chamber’s beaten earth floor proved to have been fully covered with the remains of at least four restorable storage jars.

In general, the northern storage room had a white plaster floor and mudbrick walls that were also almost all plastered, with the line of the plaster preserved and visible as high as the top of the mudbricks that were preserved on the stone foundations of the walls. In the room there is substantial evidence of possible ground movement due to some tectonic activity in the area. On the floor were the remains of nearly 40 restorable large, mostly handle-less, Canaanite storage jars, which were found covered by a thick collapse of mudbricks containing much calcareous material. The jars in this room show no uniform orientation, but lay where they fell in various directions. All are resting on the floor, with the exception of one which is sunken into the floor. Samples for residue analysis were taken from almost all of the vessels.

In addition to the handle-less storage jars, other vessels included a smaller storage jar with two handles, a goblet (“Kabri cup”), and parts of a jug and a dipper juglet. At least three different types of rims can be seen on the various storage jars, some of which have parallels in the nearby, and contemporary, Orthostat Building. This is the largest concentration to date of restorable pottery found anywhere in the palace of Kabri and the only place on site where the team located an entire room still full of artifacts. Still, it is expected that more is to be found in the future; a southeastern entrance to the northern storage room has been found, connecting the excavated storage room with another, as yet largely unexcavated, storage room located directly to the south, in which the remains of at least six additional storage jars have already been found and stored.

On area DSouth I (DS-1), the team tried to expose the area east of Building 3079, famous for its fragments of painted plaster found in 2009 and 2011. The excavation here yielded a couple of layers characterized by pottery and more painted plaster fragments, as well as an aceramic clay-filled layer of unknown character between them.

Of the plaster fragments, one has red paint and an incised string line; another awaits detailed analysis, but may have either a small bird or a fragment of vegetation.

On Area D-West East (DWE) the team excavated a room whose only the southwest corner was known and excavated in the past. The work brought to light a very large hall or courtyard with at least two entrances. There are several superimposed plaster floors found in this room, but they exist only in parts of it due to later disturbances. All of the floors were buried under thick mudbrick collapse that included much calcareous inclusions. Another space explored during the season was Room 1415, which had one entrance, plastered floor and a couple of fire installations.

Overall, the team states that during this season they uncovered “an area of magazines, which is not an area of public or ceremonial use, as seen elsewhere in the palace. This is the first time that such a storeroom with jars still present has been uncovered within an MB palace in Canaan and been made available for residue analysis as well as pottery provenance studies. It should allow us exciting insights into Canaanite palatial economy during the early-mid second millennium BCE”.

Note: The 2013 excavation season at Tel Kabri in Israel was co-directed by Assaf YasurLandau of the University of Haifa and Eric H. Cline of The George Washington University, with Andrew Koh of Brandeis University as Associate Director. It was undertaken with grants from National Geographic, the Israel Science Foundation (ISF), Bronfman Philanthropies, and the Institute for Aegean Prehistory (INSTAP), with additional funding provided by the Columbian College of Arts and Sciences at The George Washington University as well as private donors, including William and Rebecca Sanders, Joshua Eisen, William and Melinda Becker, and BASONOVA. Assistance in conservation and storage was provided by the Leon Recanati Institute for Maritime Studies, directed by Professor Michal Artzy.