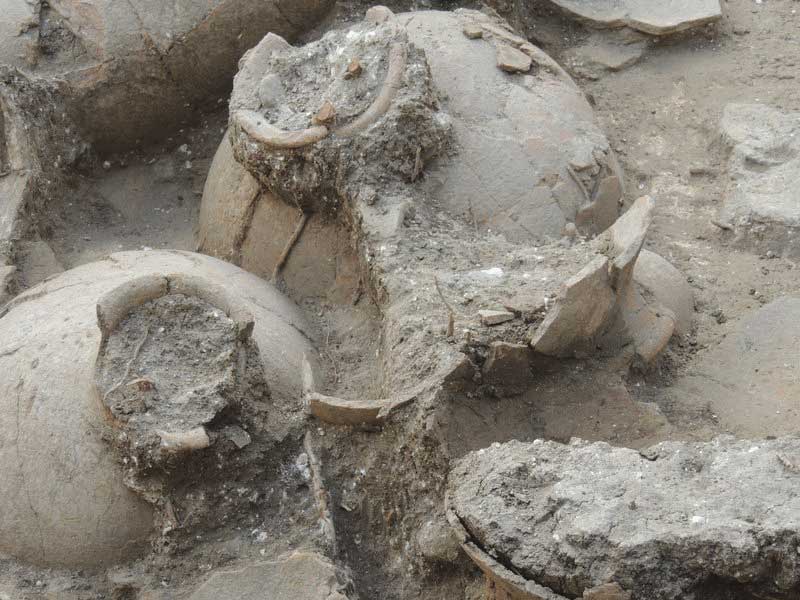 Cananite rulers wanted it red, sweet and spicy. The reference goes to wine-drinking habits during the Middle Bronze Age according to remnants of wine from a destroyed cellar found at Tel Kabri Palace, Israel.

According to a PLOS ONE report by the international interdisciplinary archaeological team excavating the large settlement situated on modern Israel’s northwestern part, remains of 40 large jugs found at the site show traces of wine infused with herbs and resins. The broken jugs, once full of wine enough to fill 3,000 modern bottles in total, were found at a room connected to a banquet hall, within a complex researchers identify to a palace. The room’s position does not indicate that the wine collection stored inside was intended for trade or for wide communal use. On the contrary, the find represents a personal wine cellar, made to support an important person’s need to please himself and his guests.

Originally unearthed in 2013, the cellar and its content went through study during the past year. Only now the researchers, led by Brandeis University archaeologist Andrew Koh, were able to produce results on the composition of the liquid once filling the now broken pots. 32 of the pots were taken for analysis. They all contained races of tartaric acid, one of the main acids found in wine. All but three of the jars also had syringic acid, a compound associated with red wine specifically.

As mentioned by Smithsonian.com’s Victoria Jaggard, residue in the jars also showed signs of various additives, including herbs, berries, tree resins and possibly honey. The result would be a unique, sweet wine-based drink. And although there has been criticism over the theory (some experts like University of Pennsylvania’s Patrick McGovern do not even connect the acids to wine), the reconstructed recipe finds parallels in written records from ancient Egypt and Greece.

Researchers even have plans to popularize their find even more. There are thoughts that the ancient recipe would actually come to life, by spicing up a modern variety which wouldhave affinities to the ancient one. “It may not be a huge seller, but it would be fun to do in the spirit of things.” The scientists are even hoping they will be able to recover grape DNA from future samples of the jars, which might bring them closer to a faithful reconstruction of the ancient wine.

Their attempt will not be anything new, however. Penn’s expert McGovernas had some commercial success bringing back ancient beers, while Greek retsina is nothing else than white wine with pine resin added to it.