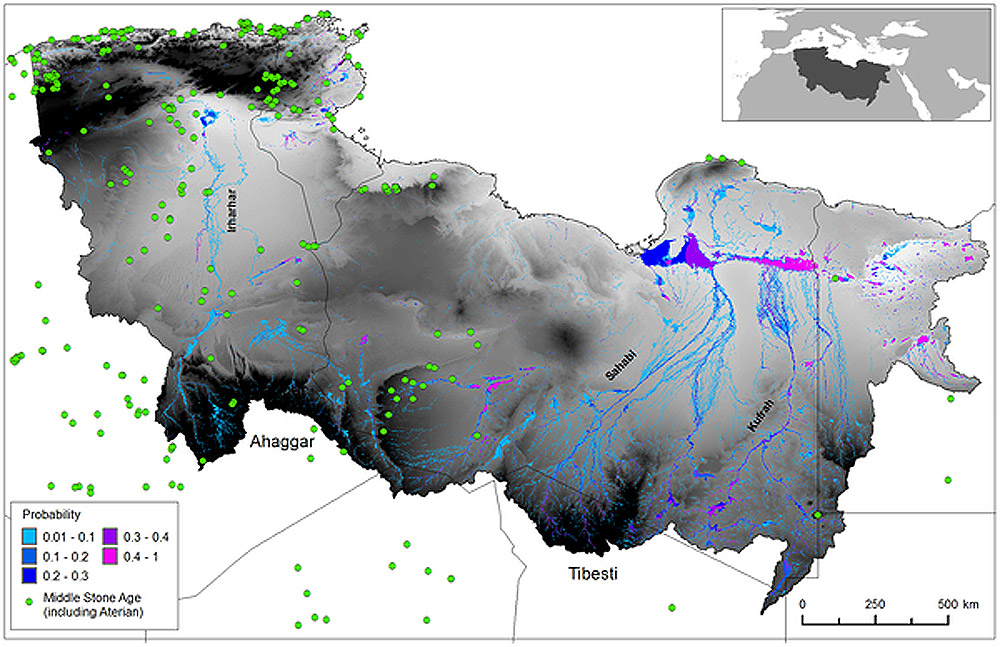 Early humans migrated through Africa along fertile river systems which once flowed across the Sahara. This is what a new research suggests, adding a new piece on the puzzle of the “Out of Africa” theory.

Researchers from the University of Hull recently proposed that our ancestors managed to cross Africa by following three, now dried-up, rivers that used to link a series of mountains covering the area from Central Africa to the Mediterranean.

As reported in the abstract of the research paper published at PLOS ONE, the team used a novel palaeohydrological and hydraulic modelling approach to test the hypothesis that under wetter climates c.100,000 years ago major river systems ran north across the Sahara to the Mediterranean, creating viable migration routes” to confirm that “three of these now buried palaeo river systems could have been active at the key time of human migration across the Sahara”. Running from the South to the North, these rivers were: Irharhar (connecting the Ahaggar area to the Mediterranean coast of modern day Algeria), Sahabi (running between Mount Tibesti and the Benghazi coastal area) and Kufrah (just east of Sahabi).

Tom Coulthard, Professor of Physical Geography at the University of Hull and lead author of the research paper, explained why these rivers were likely to be crucial to the movement of early humans:

“The rivers would have provided fertile corridors, a 1000km long and up to 100km wide, which ran north across the Sahara, towards the Mediterranean. In particular, our simulations have identified one river that appears to be the most likely route for human migration”.

Unexpectedly, it is the most western of these three rivers, the Irharhar river, that represents the most likely route for human migration. As mentioned in the paper’s abstract, the Irharhar river flows directly south to north, uniquely linking the mountain areas experiencing monsoon climates at these times to temperate Mediterranean environments where food and resources would have been abundant.“Moreover, the high number of Middle Stone Age archaeological sites that are concentrated around this region provide further evidence that this river was especially important”, adds Dr Coulthard.

The period of interest to the researchers happened before the last Ice Age, when there was a dramatic increase in humidity in what is now the Sahara Desert. For some time, this change in climate is thought to have played a significant role in allowing early humans to migrate out of Africa. However, this is the first strong, quantitative evidence for the of presence three major river systems that would have provided suitable routes for the dispersal of early humans.

Although there is considerable evidence to show that humans migrated across Africa as long as 125,000 years ago, the fate of those early migrants is less well understood. Recent research suggests that the ancestors of all humans living today left Africa between 62,000 and 95,000 years ago.

NOTES
1. Coulthard et. al., "Were Rivers Flowing across the Sahara During the Last Interglacial? Implications for Human Migration through Africa", PLOS ONE, http://tinyurl.com/pa3bl99 (13/09/2013)
2. University of Hull, http://www2.hull.ac.uk/newsandevents-1/newsarchive/2013newsarchive/september/greencorridorsoutofafrica.aspx (13/09/2013)