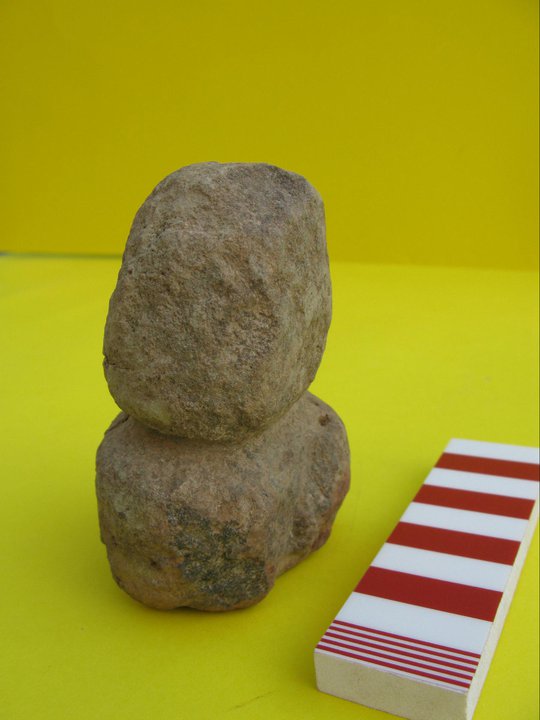 Τhe 2013 excavations at the PPNA (9th millennium) site of Ayia Varvara-Asprokremnos have been completed. The excavations were conducted from the end of March to mid-June 2013 under the direction of Dr Carole McCartney on behalf of the Archaeological Research Unit of the University of Cyprus working in partnership with Cornell University and the University of Toronto.

This season of excavation focused on the recording of three structures, evidence of the industrial activities carried out at the site and documenting the sequence of occupation. The site, currently dated by radio-carbon to between c. 8800-8600 BC cal., marks the initiation of the Neolithic period on Cyprus at a time when the transition from hunting to farming economies was beginning throughout the Middle East. Taking the Neolithic Revolution into the Mediterranean zone, the occupants of Ayia Varvara-Asprokremnos carried cultural traditions and intensive resource procurement and manufacturing activity to the island some 11000 years before present.

Excavations during 2013 continued to unearth evidence of significant manufacturing activity associated with the production of chipped stone tools, which together with a second resource, namely ochre, combine to explain the choice of site location adjacent to the Lefkara chalk belt and the sulfide deposits of Mathiati. The processing of multi-coloured pigments was facilitated by a large array of ground stone tools dominated by pounding tools and grinders that facilitated the processing of pigments as evidenced by significant numbers of tools with ochre residues. Such tools were cached in features dug into structure floors or placed in heaps along with other evidence of occupation including discarded chert tools and animal bones. One new artifact type associated with the processing of ochre is marked by a number of large chalk slabs exhibiting ochre residues in conjunction with clear cut marks on working surfaces that appear to have functioned as cutting boards.

The 2013 season saw continued excavation of the curvilinear semi-subterranean structure that dominates the northern end of the site, Feature 300. A large array of stone tools deposited on the floor of this structure along with numerous pits and postholes cut into the floor were documented. Unique among these finds were two large pits each with a thick clay lining that could have facilitated the storage of water within the structure. Postholes and burnt mud plaster encircling the circumference of the interior pit wall of the structure provide evidence of a substantial timber super-structure used to roof the building.

Excavations in 2013 unearthed two new structures constructed after Feature 300 was abandoned. The earlier one, Feature 848, appeared beneath the ochre processing area documented in the 2012 season in the centre of the site. Though only a quarter of the structure was excavated in 2013, Feature 848 shows a simplified method of construction in comparison to the earlier Feature 300, revealing a clear devolution of architectural form. Feature 848 is similarly a semi-subterranean pit structure, but lacks evidence of the complex timbered super-structure shown in the earlier building, exhibiting instead a single post-hole dug into the flat floor of the building along with a number of pit features some of which contained caches of stone tools. One of the most exciting discoveries associated with this building was a collection of four igneous stone objects including two flat cobbles, one with an extensive red ochre reside, a perfectly pecked stone sphere and a complete female statuette. This cache of artifacts was used to mark the abandonment of the structure and provides the earliest complete human figurine currently known on Cyprus.

To the south of Feature 848, a third large semi-subterranean building was unearthed beneath a thick midden deposit. Feature 840 was cut into the same natural surface as Feature 848, but appears to post-date the former, being contemporary with the use of the ochre processing area that sealed Feature 848 beneath. Feature 840 thus represents the third in a sequence of structures and shows a further devolution of the architectural style employed at the site. Feature 840 is a simple dish-shaped pit structure furnished with a single post-hole that could have supported only a comparatively light roof for its earliest curvilinear earth floor, with a cluster of small stake holes providing evidence of a similarly light super-structure during a later re-occupation of the building. Feature 840, though simple architecturally, revealed a substantial cache of river stones and ground stone tools placed on the floor and used for the processing of ochre throughout the life of the structure, implying the intensification of the ochre industry during this phase of occupation at the site.