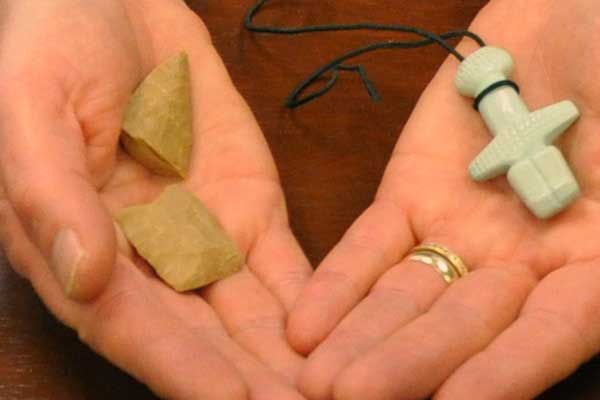 The tiny Mediterranean island about 1,000 years earlier than previously believed

Artifacts found at an archaeological site in Cyprus support a new theory that humans occupied the tiny Mediterranean island about 1,000 years earlier than previously believed – a discovery that fills an important gap in Cypriot history.

Excavations at Ayia Varvara-Asprokremnos (AVA) by archaeologists from the University of Toronto, Cornell University and the University of Cyprus have uncovered, among other objects, the earliest complete human figurine on the island. The site has been carbon-dated to between 8800-8600 BC, near the beginning of the Neolithic Period – also known as the Late Stone Age – when the transition from hunting to farming economies was occurring throughout the Middle East.

“This tells us that Cyprus was very much a part of the Neolithic revolution that saw significant growth in agriculture and the domestication of animals,” says Sally Stewart, a research fellow at University of Toronto’s Archaeology Centre and Department of Anthropology. “With farming came a surplus of wealth, in both food and time. People now had the time to specialize in other roles such as manufacturing, and they had the time to spend making figurative art.”

The figurine – a complete female statuette – was found in a collection of igneous stone objects that also included two flat stone tools, one with extensive red ochre residue. The presence of tools provides further evidence of significant manufacturing activity associated with the production of chipped stone instruments and the processing of ochre. It likely also explains the location of the site, which is adjacent to a chalk bed and large sulphite deposits.

Cyprus was always thought to have been permanently settled and following an agricultural lifestyle much later than the mainland areas surrounding the Mediterranean Sea. But with less than 100 kilometres in between, settlers could easily have crossed the water from what are now northern Syria, Turkey and Lebanon.

“People would have seen the mountains and they were likely attracted by the abundance of chert rock beds,” says Stewart. “They were already using chert to make stone tools and would have wanted to exploit the resource.”

The site at AVA was first discovered in the early 1990s. Similar sites were found in 1998 by Stewart and Carole McCartney of the University of Cyprus, and the preliminary analysis of objects found at them led McCartney to theorize that the items are older than previously thought. By 2005, Stewart, McCartney and Cornell University archaeologist Stuart Manning – a member of U of T’s Department of Art at the time – began making plans to survey the site at AVA and eventually conduct a full excavation.

“With these discoveries we really are getting a clearer picture of how much was going on Cyprus,” says Stewart. “We can no longer think of it as being on the fringe of what was happening across the region at the time.”