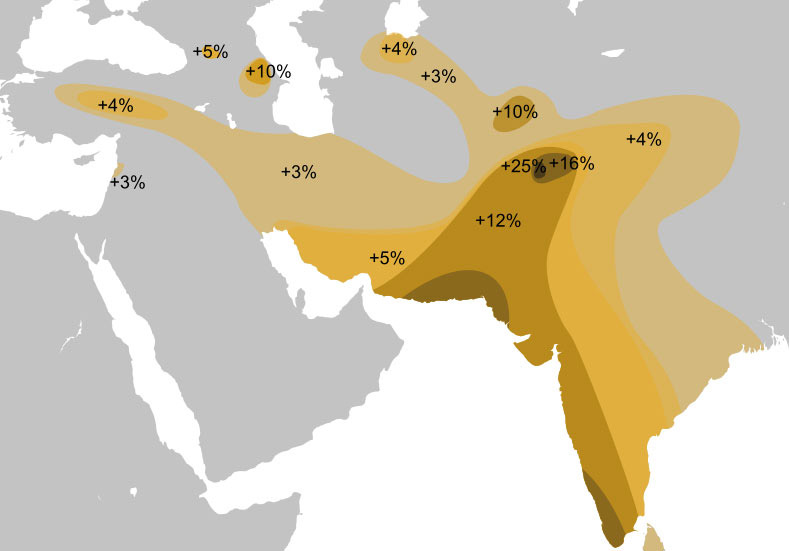 India and Mesopotamia linked by genetics

The continuing debate regarding the origins of people inhabiting ancient Mesopotamia during the region’s long history led the authors of a new report published in the Open Access journal PLoS ONE to attempt an isolation and analysis of mtDNA sequences from the area.

Research was also carried out by another team (Sołtysiak et al 2013) examining fifty-nine dental non-metric traits on a sample of teeth from 350 human skeletons excavated at three sites in the lower middle Euphrates valley. This showed a stable population until after the Mongolian invasion which resulted in a large depopulation of northern Mesopotamia in the 13th century CE. The final major change occurred during the 17th century with Bedouin tribes arriving from the Arabian Peninsula.

Although it is not possible with DNA analysis to reconstruct the details of an individual’s life, it can provide insights into his/her ancestry. In ideal conditions, the fossil sequences are isolated from remains unearthed in permafrost or temperate regions and only in rare circumstances from skeletal material found in a subtropical arid climate, as it is suspected that the potential is highly limited in such cases.

Thus, only scarce datasets from the Mesopotamia region are available. Still, using ancient DNA methodology, the team were able to confirm the possibility of isolating amplifiable sequences from the skeletons under just such challenging conditions. In the case of one of the studied specimens the researchers analysed both mtDNA and nuDNA sequences.

Three others were analysed only to confirm their origin on the basis of HVR-I sequence. Studied remains were excavated at two archaeological sites in the middle Euphrates valley and dated between the Early Bronze Age and the Late Roman period (between 2500 BCE and 500 CE).

Origins in the Indian subcontinent

The studied individuals carried mtDNA haplotypes corresponding to the M4b1, M49 and/or M61 haplogroups, which are believed to have arisen in the area of the Indian subcontinent during the Upper Palaeolithic and are absent in people living today in Syria. However, these same haplogroups are present in people inhabiting today’s Tibet, Himalayas, India and Pakistan.

The suggestion is that these analysed remains from Mesopotamia belonged to people with a genetic affinity to the Indian subcontinent as the distribution of identified ancient haplotypes indicates a solid link with populations from the region of South Asia-Tibet (Trans-Himalaya).

This may represent either that the individuals are descendants of migrants from much earlier times (Palaeolithic), spreading the clades of the macrohaplogroup M throughout Eurasia and founding regional Mesopotamian groups like that of Terqa, or they are from merchants moving along trade routes passing near or through the region.

The obtained data has enriched the modest database of Mesopotamian ancient DNA and suggests a possible genetic link of the region with the Indian subcontinent in the past. There are no traces in the modern Syrian population, which is explainable as the dental study showed, by later depopulation and recolonisation, but opens up the possibilities of further work to examine the routes of both populations and civilisations.