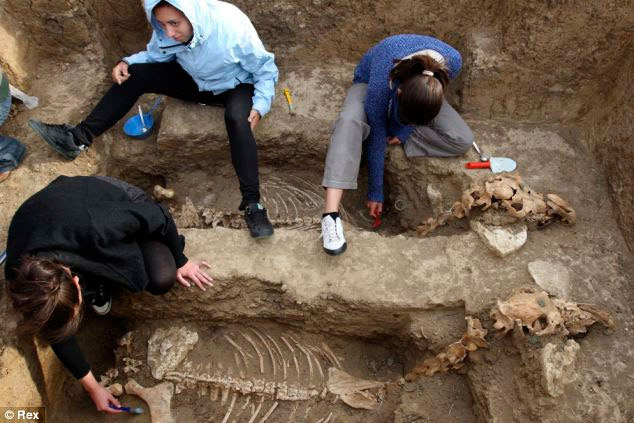 The Sveshtari chariot and other wonderful things

Archaeological season 2013 draws to a close

The archaeology season for Bulgaria is winding down, with a number of dig teams announcing their findings in recent days. Although this summer has not yielded any treasure troves comparable to the one found at Sveshtari in 2012, there is still time – that particular find came in early November.

At Sveshtari, near Razgrad, the team led by professor Diana Gergova has found the remains of a two-wheel chariot, buried with two horses still in their harness. Each horse was buried in its own sarcophagus.

Gergova described the find as unique for Bulgaria, the first physical evidence confirming some of the historical theories about Thracian culture. A mural of a two-wheel chariot has been previously found in a burial mound near Kazanluk, but the two chariots previously found by Bulgarian archaeologists both had four wheels, she said.

Gergova said that it was too early to draw conclusions about the burial site, but said it was likely evidence of the burial rites practices by Getae tribes. She estimated that the burial dated back to the third or fourth century BCE.

This was the second year Gergova’s team has carried out digs at Sveshtari, a site that remains largely unexplored – although it does carry signs of having been raided by treasure hunters fairly recently, as the team found a plastic mineral water bottle from 2001, judging by its label.

A distinctive feature of the Sveshtari site is that the dozens of burials follow the pattern of the constellation Orion.

Near the village of Balei, in Vidin district, archaeologists led by Georgi Ivanov and Tanya Hristova, continued to excavate the necropolis of a settlement dating back to the middle of the second millennium BCE.

The settlement itself, which appears to have been inhabited between 1600 BCE and 1000 BCE, was found in 1970, but the necropolis was only discovered in 2010. This year’s digs focused on 16 separate burials, which yielded numerous items, including more than 50 undamaged ceramic vessels, stone and bone tools, as well as bronze decorations.

Even older is the site near Suvorovo, in Varna district, where archaeologists led by Vladimir Slavchev have been excavating a pottery workshop believed to be about 6500 years old.

Although archaeologists have previously found the remains of ovens that could have been used to fire clay pots, the Suvorovo site is the first confirmed pottery workshop excavated in Bulgaria.

“The find of this workshop shows that there was specialised production during the middle stone and bronze ages. This means that we have people who are engaged exclusively in making a specific product, which means that the second division of labour has already happened,” Slavchev said, as quoted by Bulgarian National Television.

The site belongs to the same Eneolithic (or Chalcholithic) culture that produced the Varna necropolis, which yielded some of the oldest golden jewellery in human history, dating back to the middle of the fifth millennium BCE.

Another site that has seen extensive excavation this summer is near the town of Pomorie at the Black Sea coast. There, the team led by Sergei Torbatov has been focusing on the ruins of a Roman villa, believed to have belonged to one of the richest families in the town of Anchialos.

Among the distinctive features of the manse, built at the beginning of the second century CE, are a unique mosaic, Persian ceramics, marble imported from quarries from the islands in the Sea of Marmara, as well as a well-stocked wine cellar with amphorae imported all the way from the Mediterranean Sea.

Items found by the archaeologists include a Roman imperial trade seal from the fourth century CE, a bronze cross necklace from the 11th or 12th century, as well as a pewter seal of a guard captain.