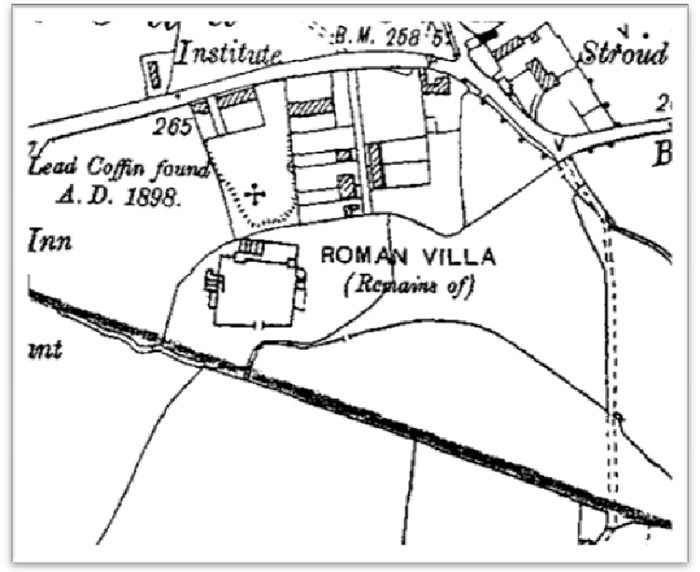 Where the Druids used to gather

Roman ruins could have been a temple

Α buried Roman villa at Stroud, UK, may be far more significant than was first thought.

When the field south of Finchmead Lane was excavated in 1907, the large building revealed (measuring 140ft by 52 ft with wings off rooms) had been identified with a villa, similar to other such villas found in the area (including at Colemore and Liss), built by the Celts under Roman rule. However, recent research suggests that it may have been used as a Romano-Celtic cultic space.

After the Roman invasion of 43AD, attempts to stamp out the Druid religion were at first prosecuted with zeal, but as the Romans and Celts mingled and inter-married so their religions merged with both Roman and Celtic deities worshipped until long after the Romans’ departure in 410AD.

In the Stroud building “There are oddities – the bath house is larger than a villa of this size might need, perhaps more fitting as a bath-house for a temple settlement. And an octagonal building between the wings is distinctly odd and un-villa like. Octagonal Romano- Celtic shrines have been found elsewhere in Roman Britain, and there is a Roman bronze statue of a Belgic winged figure on a horse which may have been a deity of the Celts, which it is thought was found at Stroud”, says  Petersfield Archaeology Group chairman Peter Price.

“Another artefact found near Petersfield also provides some evidence for religious practice in the Petersfield area, called the Petersfield Cernunnos Coin. It is an interesting Celtic Iron Age silver coin and quite unique as it shows the Celtic horned god Cernunnos on one side with a wheel device centred between his antler-like horns. Some experts are of the opinion that it may be evidence of Druids”, adds Price.

Druids were Celtic priests who believed water features such as springs were home to deities. There are springs near the Stroud Roman site. And if the building was a temple it may have supported a thriving community. Price added: “We hope to carry out fieldwork, geophysics, a landscape survey and micro scale excavations around Stroud to try to find more clues to the size of the Roman settlement and how it connects to nearby villas”.

The group also hopes to combine with Liss Archaeological Group to trace Roman roads and other prehistoric track ways and compile a database of Roman sites in the area, such as the one at Queen Elizabeth Country Park.