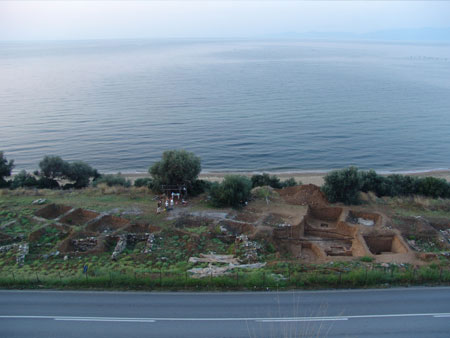 The Greek-Canadian Archaeological Mission of Argilos excavating at the site of ancient Argilos on the coast of Macedonia have uncovered the remains of structures, reporting that the finds will help open an additional window on the development and economy of one of the earliest Greek colonies in an area that was previously settled by the Thracians.

Among the discoveries was a large portico consisting of at least seven storerooms.

“The building is in a remarkable state of preservation, and five rooms have been partially excavated this year,” according to excavation co-directors Zizis Bonias of the 18th Ephorate of Prehistoric and Classical Antiquities and Jacques Perreault of the University of Montreal. “In its early state, the building probably dates back to the 6th century BC.”

Four kilometers West of the Strymona river delta, the ancient city is set on a hill known as Palaiokastro. The site was colonized by Greeks during the 7th century, around 655/654 BC, making Argilos “the earliest greek colony on the Thracian coast”.

The portico is just one of a number of well-preserved finds at Argilos. Though the settlement was established in what at the time was territory inhabited by the ancient Thracians, archaeologists have thus far uncovered no clear signs of conflict between the two co-existing cultures at the site during that time, and one of the goals of the investigations is to explore the nature of the relationship between the Greeks and the Thracians at that location.

The site was first identified by P. Perdrizet in 1883 by referencing the writings of Herodotus, who wrote that the Persians encountered Argilos after crossing the Strymona river on their way to conquer Athens. The first limited excavations were conducted by the Greek archaeological service in the 70’s, uncovering several tombs of the ancient city’s necropolis. But the first serious systematic research did not begin until 1992 by a joint Greek-Canadian team.

The current excavations are being conducted by the Greek-Canadian Archaeological Mission of Argilos, a collaborative effort between the Ephorate of Prehistoric and Classical Antiquities of Kavala and the University of Montreal. The excavations have revealed a significant number of architectural structures, including a large 5-meter wide street leading from what has been identified as a port, to the acropolis on the hill. According to the archaeologists, buildings, both public and domestic, lined this street. “Some of these buildings are extremely well preserved, with walls up to 4 meters high,” report Bonias and Perreault. “This state of preservation helps us understand the way they were built and, thus, enables us to propose realistic reconstructions of the main buildings.”