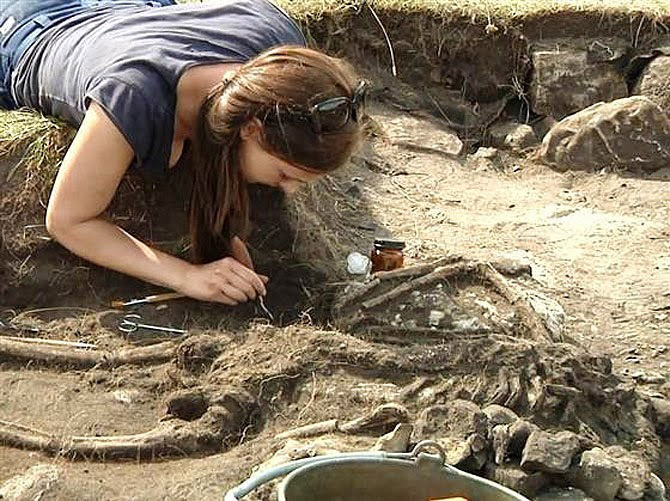 In the fort of Sandby, Öland Island

Archaeologists at Lund University have found what they describe as a moment frozen in time by a brutal massacre, leaving a fort untouched since the 5th century AD.

“There are so many bodies, it must have been a very violent and well organized raid”, says Helene Wilhelmson, a PhD student in historical osteology, who was astounded when the skeletons kept emerging from the Sandby fort site on Öland, an island just off the Swedish coast.

During the Migration Period in Scandinavia it was customary to burn the dead, and very few uncremated remains have previously been recovered. However, in Sandby,  five bodies have been discovered in one house alone. Human bones have been found in other parts of the fort, making it highly likely that many more bodies are yet to be dug out.

Precious items have also been recovered, raising questions over why they were not plundered in the wake of the massacre. The team has now gone over the site collecting all precious metals to avoid modern plundering.

Only a few houses have been excavated so far, and the archaeologists believe that hundreds of people could have lived within the walls of the fort. Lund University archaeologist Nicoló Dell’Unto is creating 3D-models of the site, using groundbreaking 3D technology, in order to reconstruct how the crime scene unfolded, and to get a more complex overview of the site.

“Using 3D-modeling gives us the unprecedented opportunity to see all the bodies simultaneously, even though the skeletons were removed one by one”, says Nicoló Dell’Unto.

Why the fort has been left untouched for 1,500 years remains a mystery. One theory is that the location became taboo after the massacre, but the archaeologists hope the answer will become clearer with further excavations.

“It’s a day in life of the Migration Period, and that’s completely unique. We have nothing to compare it to”, concludes Helene Wilhelmson.