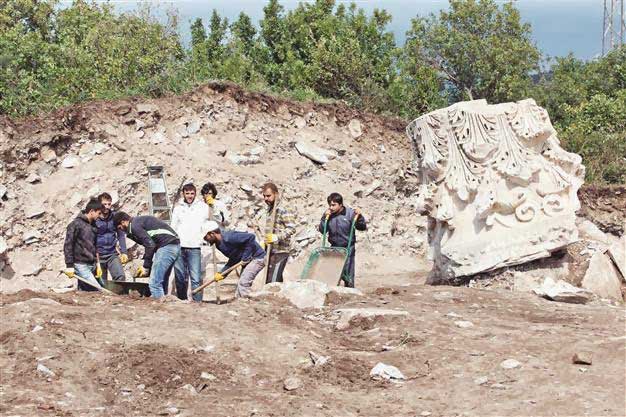 In the temple of Hadrian, in Kyzikos

During excavations at the Temple of Kyzikos Hadrian in Turkey’s northwestern province of Balikesir’s Erdek district, the a massive Corinthian-style column capital was unearthed dating to the Roman period.

This year’s excavations in the temple had started on August 15 and ended on October 8. The head of the excavations and Ataturk University Archaeology Department Associate Professor Nurettin Kochan said the excavations were joined by a team of 30 workers as well as university members and students, adding that they were working in the western part of the temple.

He said besides architecturally decorated pieces, the excavations had unearthed the broken piece of human figures, the claw of a very big eagle and the head of a bull in temple friezes (a long narrow band of sculpture that runs along the architrave of temples).

“The Temple of Hadrian, which is equal to Didyma’s Apollo and the Ephesus Artemis temples in terms of size, is different from the others with the use of gilt in women figures and red and blue colors in its decoration. Also, the column heads have so far been unearthed in pieces, but this year a column head was found in one piece. The Temple of Hadrian is 116,2 meters long. The other temples are almost the same size but in Hadrian, decorations are red and blue and the hair of the women figures are decorated with gilt.”

Kochan said what they found this year was different and significant for the world of archaeology. “This is the Corinthian column head, which is nearly 20 meters high and one of the three column heads in the temples,” he said.

“With 1.9 calibers and 2.50 meter height, this is biggest and the most elegant Corinthian column head made within the borders of the Roman Empire. There is no other one in the Corinthian style. When we compare it to the Baalbek Temple of Jupiter in Lebanon, which is regarded as the world’s biggest and the most magnificent Corinthian style temple, the Temple of Kyzikos Hadrian comes ahead. This historic column head will make a great contribution to the country’s tourism,” explained Kochan.