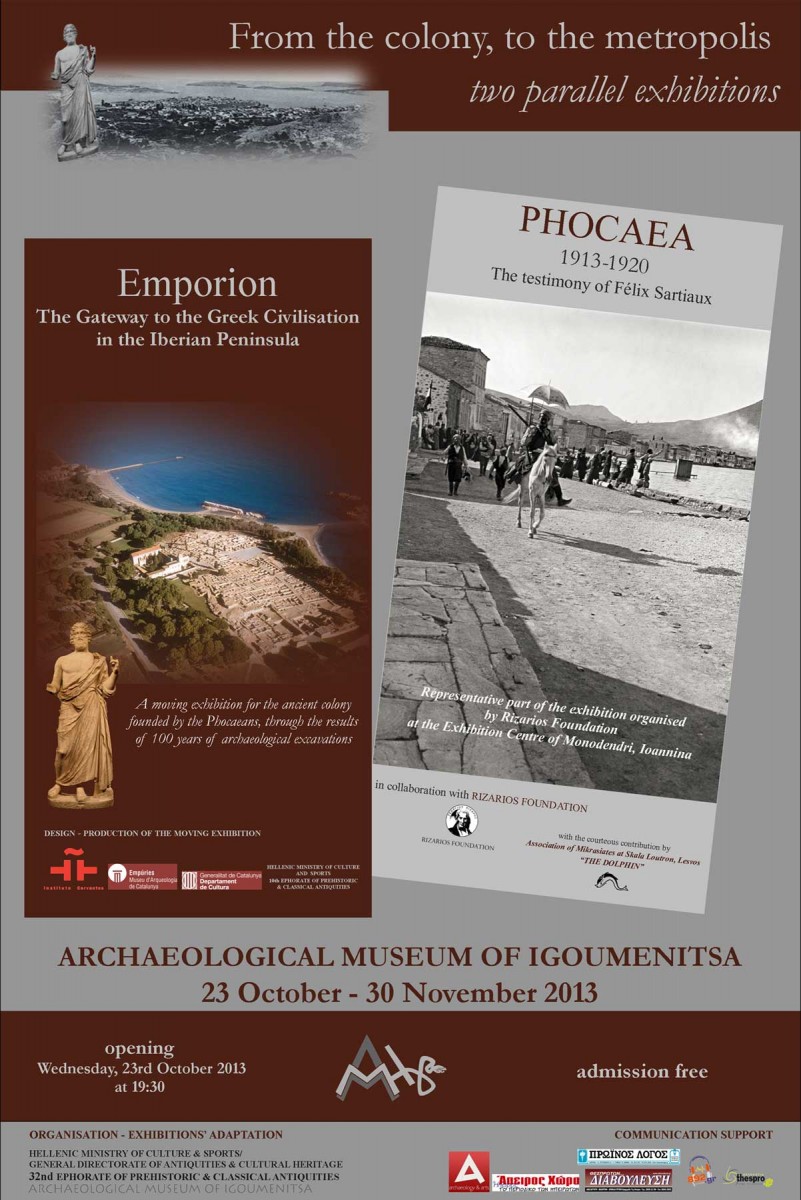 From the colony, to the metropolis

“From the colony, to the metropolis” is the title embracing the two parallel exhibitions hosted at the Archaeological Museum of Igoumenitsa from October 23rd until November 30th 2013. The two exhibitions, organised under the auspices of the 32nd Ephorate of Prehistoric and Classical Antiquities, present aspects of the ancient and recent history of the Phocaeans, following an itinerary full of voyages, adventures, culture and memories.

Through photographic, informative and audiovisual material the moving exhibition “Emporion. A Gateway to the Greek Civilisation in the Iberian Peninsula” displays the history of the ancient Greek city Emporion, the colony on the Mediterranean coastline of Catalonia founded by the Phocaeans in the early 6th century BC, based on the results of 100 years of archaeological excavations (1908~2008). Launching from the Ionian Phocaea in Asia Minor, the renowned ancient seafarers had already established, a century earlier, the colony of Marseille on the French coast.

Emporion, which is the westernmost Greek settlement of the ancient world, soon developed from a small trading place (emporion) into an important city and port and became a gateway for Greek Classical culture into the Iberian Peninsula.

The presentation of the exhibition is organized in collaboration with Instituto Cervantes Athens, the Archaeological Museum of Catalonia “Emporion”, the Province of Catalonia and the 10th Ephorate of Prehistoric & Classical Antiquities.

The parallel exhibition “Phocaea 1913-1920. The testimony of Félix Sartiaux” comprises selected photographic material of the homonymous exhibition first organised by Rizarios Foundation after the research by the historian of photography Haris Giakoumis, who discovered the Archive of Félix Sartiaux in Paris.

Félix Sartiaux (1876-1944), French engineer and archaeologist, was the first to organize archaeological excavations in Phocaea (Asia Minor), the metropolis of ancient Emporion, in 1913. He became witness of the tragic events of 1914 during the “fist persecution” in Old and New Phocea and the expulsion of the local Greek population. For the inhabitants of Phocea Sartiaux became their protector. Under the flag of the French Republic raised in four houses in in Phocea, many persons found a hiding place before they abandoned their homeland. He followed the return of the refugees in Phocaea, in 1919-1920, and alongside the continuation of his scientific work he started gathering testimonies for the persecution’s events and the reconstruction of the destroyed place.

The exhibition is organized in collaboration with Rizarios Foundation and with the courteous contribution by the Association of Mikrasiates at Skala Loutron, Lesvos “The Dolphin”.

Short speeches will be offered by the contributors of the exhibition representing the Archaeological Museum of Igoumenitsa and by the President of Rizarios Foundation – Professor Emeritus at the University of Ioannina, Mr. Christos Massalas.

The exhibitions will be open during the working hours of the Archaeological Museum of Igoumenitsa, with free admission.