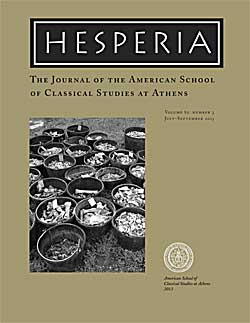 The American School of Classical Studies at Athens

The American School of Classical Studies at Athens is pleased to announce the publication of Hesperia 82/3. Topics in this issue include the Early Bronze Age settlement at Ayia Irini, Kea; horos inscriptions of the Bouleuterion of the Areopagus; the meaning of the funerary stele of Shem/Antipatros; and the archaeological finds from the 2011 excavations at Corinth, west of the theater. Subscribers can read the issue online at JSTOR, which now hosts all current issues of Hesperia as well as an archive of past volumes.

“Ayia Irini II–III, Kea: The Phasing and Relative Chronology of the Early Bronze Age II Settlement”, by David E. Wilson, presents in detail the EBA deposits found at Ayia Irini and relates them chronologically to other sites in the west Aegean. The article is furnished with 12 tables and copious notes with ceramic comparanda that help to substantiate the author’s proposed chronological relationships.

“Two Horos Inscriptions of the Bouleuterion of the Areopagus: Epigraphy and Topography”, by Gerald V. Lalonde, considers anew the dating of the two horos inscriptions found on Agora I 5054. The author discusses how the revised dating could indicate that the prestige of the Boule of the Areopagus was quite long-lived.

“Phoenician Lions: The Funerary Stele of the Phoenician Shem/Antipatros”, by Olga Tribulato, provides a new interpretation of the funerary stele’s inscription and discusses how the religious ideas of both Greece and the Near East were both influential in producing the particular iconography found on the stele.

“Corinth 2011: Investigations of the West Hall of the Theater”, by Charles K. Williams II, contributes to our understanding of Roman Corinth by elucidating the history of the area west of the theater through discussions of the area’s finds and stratigraphy. The West Hall appears to have been used for many diverse purposes over time: first as a room in which the performers prepared themselves, then as a luxurious banquet hall, afterwards, as a workroom for different industries, and, in the end, as a dump for 8-10 tons of cattle and sheep/goat bones.