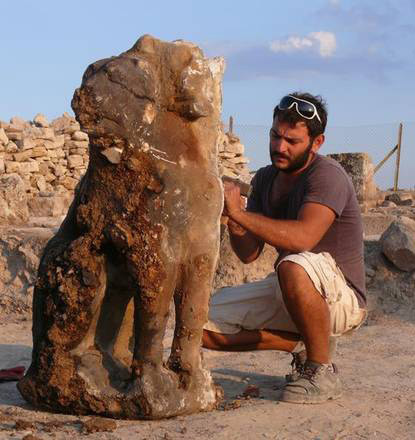 Few doubts remain that a cave discovered by a team of Italian archeologists led by Professor Francesco D’Adria in the ancient city of Hierapolis in classical Phrygia is indeed the mythical ‘Gate to Hell’ of Greek antiquity.

Celebrated as the portal to the underworld in Greco-Roman mythology and tradition, the cave called Plutonium or Pluto’s Gate was a destination for the VIPs of antiquity, such as the philosopher Cicero and the great Greek geographer Strabo.

Discovered in March this year amid the ruins that lie adjacent to the modern city of Pamukkale in Turkey, the Plutonium was found thanks to the bodies of some small birds, who appeared to have dropped dead at its mouth, due to carbon dioxide fumes coming out of it. Cicero, who visited the cave in in the first century BC, spoke of the same phenomenon.

”Any animal that passes inside meets instant death”, wrote Cicero. ”Bulls that are led into it fall and are dragged out dead; and I threw in sparrows and they immediately breathed their last and fell”. ”The Plutonium…is an opening of only moderate size, large enough to admit a man”, wrote the geographer. ”(It is) full of a vapour so misty and dense that one can scarcely see the ground”. Fittingly, D’Adria on Thursday told ANSAmed his team has made what he called ”a one-of-a-kind discovery”: a 1.5-metre-high marble statue of Cerberus, the Greek mythological three-headed dog guarding the entrance to Hades, or the Kingdom of the Dead, at the entrance to Pluto’s Gate.

Next to the three-headed dog – whom Hercules alone managed to subdue by feeding it a loaf of bread laced with narcotic poppy seeds – the Italian team found a marble statue of an enormous serpent, another mythical guardian of the gates to the next world.

The Hierapolis dig proceeds with painstaking caution. Just two meters wide, the cave has yet to be fully investigated and might hold more surprises. Meanwhile, restoration work on the exceptional site of ancient Hierapolis, whose hot springs have been used as a spa since the 2nd century BC, is ongoing.

In a church next to the tomb of St. Philip, which D’Adria discovered two years ago, eight great marble columns have been restored to their original position. The city’s theater, one of the most spectacular Greco-Roman sites in Turkey, is almost completely restored.