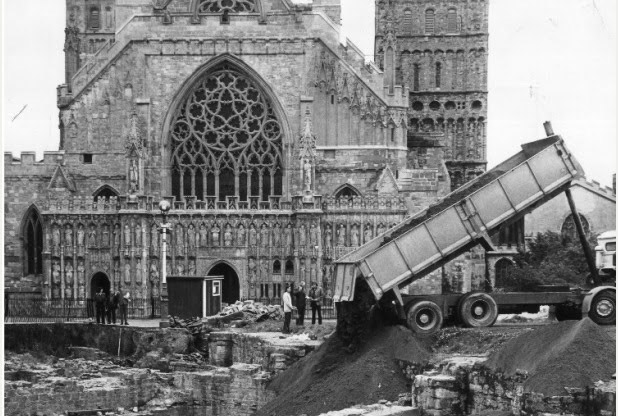 More than 40 years after they were discovered the Roman baths buried under Cathedral Green in Exeter, UK, could become a major tourist attraction under new plans being considered.

The Very Reverend Dr Jonathan Draper, Dean of the cathedral, has revealed that there is an aspiration to give the remains the display they deserve.

The baths, discovered in 1971 during preliminary excavations on Cathedral Green for the construction of an underground car park, have been described by experts as forming one of the “finest archaeological sites” in the country. According to Dr Draper, the cathedral would have talks with engineers, archaeologists, city planners and English Heritage on how it could be done.

“This is very early days and no plans have been drawn up,” he said. “There would be some very significant technical issues to be dealt with as we do not want to do anything to harm the view of the west front of the cathedral or to spoil the war memorial which is a place for people to gather, although that could be a better space than it is.”

The Dean said he wanted to make the 2,000-year-old remains more accessible. “We are looking to put a new welcome centre and external shop in part of the cloisters,” he said.

“If we do that we have to work on the area outside it to make it a good pedestrian space. With some help from the Big Lottery we have already improved Cathedral Green, but we didn’t quite finish it – and it makes sense to do that too as one big project which includes looking at how we might make the Roman remains more accessible. We like the idea, but we are only just beginning to think of how we could do it. We know it would be really exciting for the city, for the cathedral and the whole region if we were able to do this.”

Cllr Edwards said: “It would be fantastic and the city council would do everything it could to help the Dean with this. We wish the Dean the best of luck with this.”

Mr Hassan adds: “One of the first trenches cut revealed an Anglo-Saxon burial, which itself had been cut into a Roman floor, edged with blocks. This proved to be the remains of a large public building, later revealed as the town basilica. Further excavations in 1972 then uncovered the large, richly decorated and well preserved Roman Caldarium, or hot room of a bath house, built around 60-65AD. The excavations of the bath house and its associated buildings marked a turning point in the understanding of the spread of the Roman military in Britain, which had previously been thought to have only a token presence Devon and Cornwall.”

He said its discovery helped to identify the presence in Exeter of a Roman fortress of the Second Augusta legion from 55-75AD, which was home to around 5,000 legionaries.

The bath house would have accommodated several hundred bathers at any time and was more advanced in design than most of those in Italy at the time; the bath houses in Pompeii and Herculaneum at the time of the eruption of Vesuvius in 79AD were not as large or regularly planned as the one in Exeter.

Mr Hassan added: “The discovery is of international significance in terms of furthering the understanding of the spread of the Roman Empire, their advances in architecture and how they lived their everyday life.

“Revealing the Roman bathhouse would provide a fantastic additional visitor attraction to the city.”

Councillor Percy Prowse was at a meeting when the Dean announced that he was to work on a bid for lottery funding for the project.

He said: “These are some of the origins of the city of Exeter and to do this would be amazing, not just for Exeter and the cathedral but for the whole of the region.”

A history of digging up the Cathedral

In 1971, the St Mary Major Church was demolished and the Exeter city archaeological team was given permission to excavate the site.

To the surprise of everyone the team found under an ancient graveyard, a Roman bathhouse (c50-75AD) of considerable dimensions and a great forum and basilica (c80-410AD).

This not only established the original foundation of Exeter as an important Roman fortress and town and was considered one of the most important sites in the country.

When the Roman legion left Exeter for Wales around 75AD the bathhouse was converted to a basilica — an administrative building and the equivalent of the modern civic centre. There are very few cities in Europe, let alone Britain, which can boast this kind of physical and literal survival of their origin.

A committee was formed of the Dean and Chapter and the city council. National architects were commissioned to prepare plans for a visitor centre which would be sympathetic to the site and would not detract from the cathedral.

The then director of museums, Dr Boylan, visited the famous Fishbourne Roman Palace and enquired what the public numbers might be and likely income. A considerable amount of work was entailed.

Furthermore, the city council said they would provide the initial expertise and, as the land was owned by the cathedral, it was agreed that income would go to the cathedral funds.

However members of the then Dean and Chapter said they would prefer a grassed site.

The council therefore back-filled the site four years later but used sand in the hope that in some future years the excavations could be uncovered with the least trouble and expense.

The initial excavations cost around £350,000, but uncovering the remains and making them available to the public could run into millions of pounds.