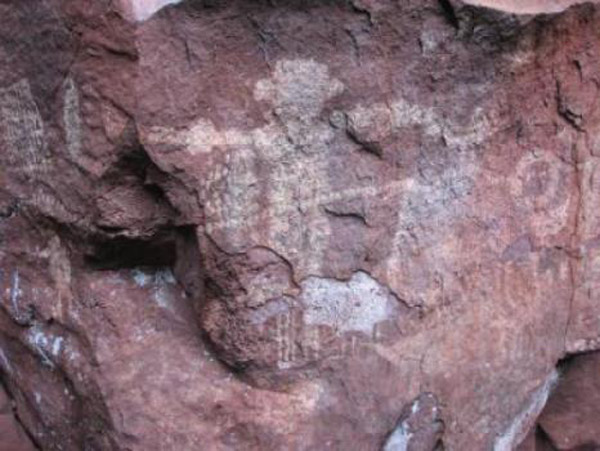 A series of 4,000-10,000 year old cave drawings discovered  by chance in Brazil’s Cerrado plateau in 2009 have been studied and published.

Archeologists Rodrigo Luis Simas de Aguiar and Keny Marques Lima describe their findings in the journal Revista Clio Arqueológica (see link below). The diversity of the renderings, according to the authors, adds significantly to our knowledge of rock art from the Cerrado plateau region that borders the Pantanal.

“Our work with the Wildlife Conservation Society focuses on promoting sustainable land use practices that help protect important wildlife species and the wild places where they live,” said Dr. Alexine Keuroghlian, researcher with WCS’s Brazil Program. “Since we often work in remote locations, we sometimes make surprising discoveries, in this case, one that appears to be important for our understanding of human cultural history in the region.”

Back in 2009, Keuroghlian and her team were conducting surveys of white-lipped peccaries, herd-forming pig-like animals that travel long distances and are environmental indicators of healthy forests. The peccaries are vulnerable to human activities, such as deforestation and hunting, and are disappearing from large swaths of their former range from southern Mexico to northern Argentina. While following signals from radio-collared white-lipped peccaries and the foraging trails of peccary herds, the team encountered a series of prominent sandstone formations with caves containing drawings of animals and geometric figures.

Keuroghlian contacted Aguiar, a regional specialist in cave drawings who determined that the drawings were made between 4,000-10,000 years ago by hunter-gatherer societies that either occupied the caves, or used them specifically for their artistic activities. The style of some drawings, Aguiar noted, was consistent with what archeologists call the Planalto (central Brazilian plateau) tradition, while others, surprisingly, were more similar to Nordeste (northeastern Brazil) or Agreste (forest to arid-land transition in NE Brazil) style drawings. The drawings depict an assemblage of animals including armadillos, deer, large cats, birds, and reptiles, as well as human-like figures and geometric symbols. Oddly, the subject of the WCS surveys in the area — peccaries — are absent from the illustrations. Aguiar hopes to conduct cave floor excavations and geological dating at the sites in order to fully interpret the drawings.

“These discoveries of cave drawings emphasize the importance of protecting the Cerrado and Pantanal ecosystems, both for their cultural and natural heritage,” said Dr. Julie Kunen, Director of WCS’s Latin America and the Caribbean Program and an expert on Mayan archeology. “We hope to partner with local landowners to protect these cave sites, as well as the forests that surround them, so that the cultural heritage and wildlife depicted in the drawings are preserved for future generations.”