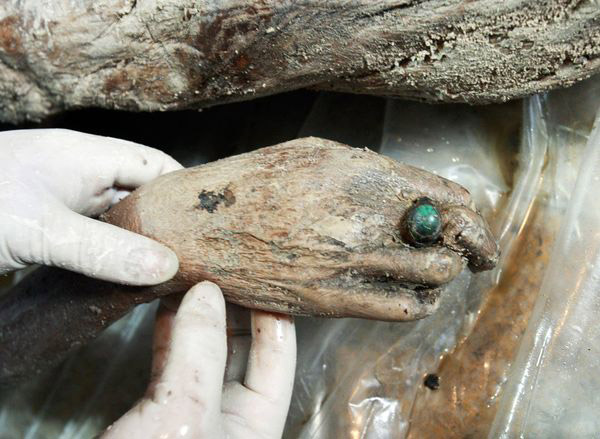 Chinese archaeologists have carefully stripped the 2,200-year-old clothing from four mummies in order to prevent decay

Chinese archaeologists have carefully stripped the 2,200-year-old clothing from four mummies in order to prevent the delicate outfits from decaying with the dried corpses.

Three skulls and four mandible bones of different sizes have been uncovered so far, leading archaeologists to believe they belonged to one man, two women, and a little boy.The mummies had badly decayed into pieces, with only messy skulls and backbones left, and further damage would occur if protective measures were not taken.

“It may be a family buried together, including a husband and two wives with one child,” Xu Dongliang with the Academia Turfanica, who joined the undressing work that began on November 20, said.”We have to separate the outfits from the mummies before there is nothing left,” he added.

Among the clothes were woollen pants, knitted mantles, fabric coats, silk scarves, and brightly-coloured sheepskin boots, which offer a glimpse into the delicate handicrafts of that time, Xu was quoted as saying by the state-run Xinhua news agency today.

Inside the fabric coat, the adult male was wearing a brown and red belt made of leather and wool and decorated with green silk. The female mummies were wearing woollen coats outside with silk scarves underneath, as well as agate stones believed to be from necklaces or waist accessories.

“These are proof that the family was aristocratic,” said Xu.

Wang Ziqiang, archaeologist with the China National Silk Museum, said that as time went by, the clothes had to be taken off, or else they would decay with the mummies. According to the researcher, the clothes remained intact thanks to the climate and geographical features of Xinjiang. Xinjiang is known for its dry climate and sandy landforms. But ancient corpses from different dynasties dehydrated quickly and were therefore mummified naturally. The oldest mummy discovered so far dates back to 3,200 years ago.

Archaeologists said, in addition to preserving the clothing, the undressing work would help them learn more through future research about the clothing of the period, spinning and dyeing techniques, the culture of Turpan and the civilisation of the ancient western regions.

The mummies were unearthed from a cluster of ancient tombs found at a highway construction site in Turpan Prefecture in northwest China’s Xinjiang Uygur Autonomous Region in 2007.

About 31 tombs containing clothed mummies, a large amount of silk cloth, woollen fabric and the world’s first artificial leg have so far been discovered at the site. Laboratory tests confirmed the mummies were from the Western Han Dynasty period, dating back between 2,200 and 2,500 years.

Xu said the four mummified bodies were packed together over thousands of years of floods and mudslides, which made it difficult to remove their clothes.