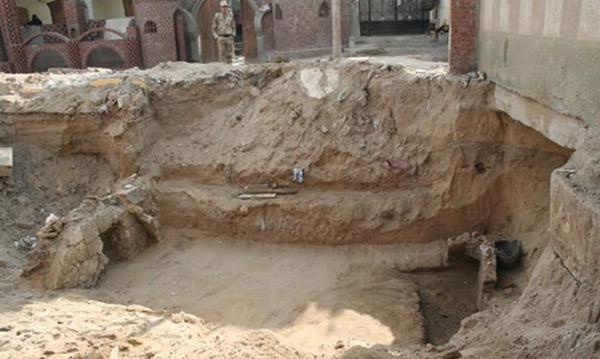 One belonging to a priest called Mina

Archaeologists from the Ministry of State for Antiquities in Egypt managed to uncovered two tombs in the city of Qantara East (Al-Qantara Al-Sharqiya), after the site’s existence was revealed by looters caught by the Ismailiya police.

The tombs were uncovered at the city’s Roman necropolis. According to the MSA Minister Mohamed Ibrahim, the first tomb belonged to a priest called Mina, from the city of Sila. The tomb is 6.5 meters high and 2.5 meters long. It is built of mud brick and bears a vaulted ceiling and a burial shaft. One of the tomb’s walls is decorated with coloured paintings depicting Mina in front of the goddess Isis. The second tomb,once housing an unidentified owner, is made of limestone and contained a collection of pottery jars, of Ptolemaic date.

According to Mohamed Abdel Maqsoud, head of the Ancient Egyptian Section in the MSA, the ongoing looting at the necropolis forced the Ministry to begin excavations, which revealed the two tombs.