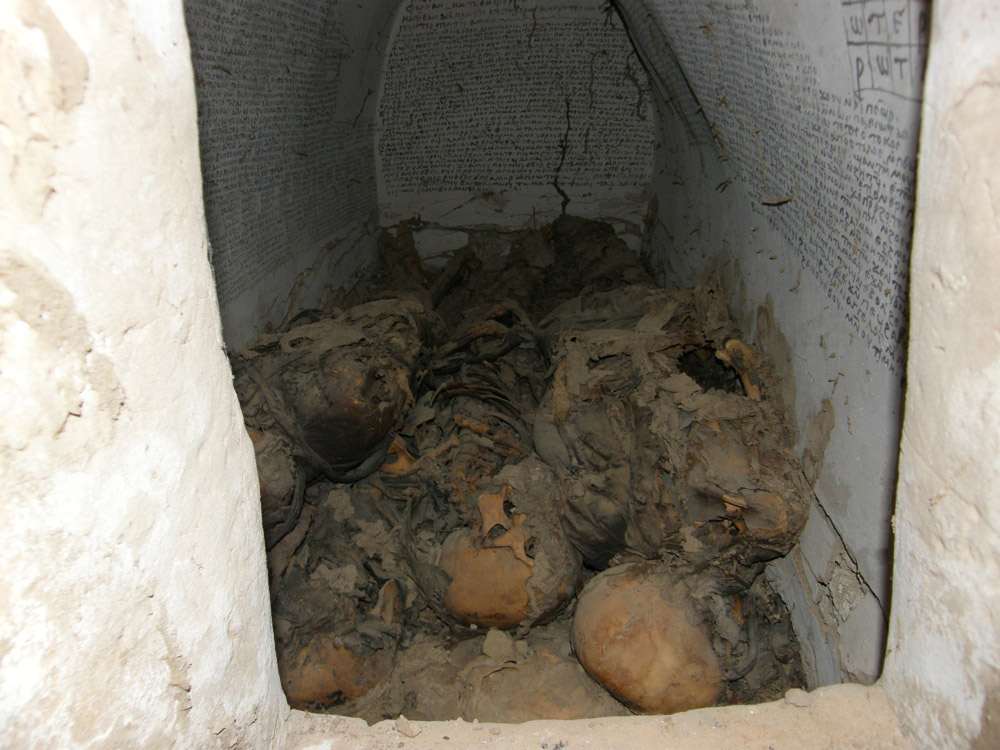 Tales From the Crypt

Results from the exploration of an 900-year-old medieval crypt, containing walls covered with inscriptions and seven naturally mummified bodies, found in Sudan in 1993 and excavated since 2009, has been published.

The crypt was located by Polish archeologists under the direction of Stefan Jakobielski in a monastery at Old Dongola, capital of the medieval Christan Kingdom of Mankuria, which flourished 900 years ago. “The entrance to the chamber was closed with red bricks bonded in mud mortar,” writes Włodzimierz Godlewski, the current director of the Polish Mission to Dongola. According to the Polish researchers, the crypt was likely sealed after the last of the burials took place.

Accodring to anthropologist Robert Mahler, a researcher with the University of Warsaw, the mummies found in the crypt identify to the bodies of seven older males, no younger than 40. One of the mummies in the crypt (scientists aren’t certain which one) is believed to be that of Archbishop Georgios, probably the most powerful religious leader in the kingdom. His epitaph was found nearby and says that he died in AD 1113 at the age of 82.

The mummies’ clothing is very poorly preserved. According to textile specialist Barbara Czaja-Szewczak, with the Wilanów Palace Museum,the men were dressed simply, mainly in linen garments that “consisted of robes characterized by a fairly simple design. Linen predominated,”. Commonly for monks, at least some of the individuals wore crosses somewhere on their body.

Inscribed with black ink on a thin layer of whitewash (paint), the texts of the crypt were written in Greek and Sahidic Coptic. They include excerpts from the gospels of Luke, John, Mark and Matthew, magical names and signs and a prayer given by the Virgin Mary, at the end of which death appears to her “in the form of a rooster.” After Mary dies, according to the text, she ascends to heaven with Jesus.

The inscriptions, written by “Ioannes,” who left a signature on three and possibly four of the walls, likely served as protection for the deceased against evil powers, the researchers said.

The inscriptions were “intended to safeguard not only the tomb, but primarily those who were buried inside of it during the dangerous liminal period between the moment of dying and their appearance before the throne of God,” write Adam Łajtar, of the University of Warsaw, and Jacques van der Vliet, of Leiden University, in the most recent edition of the journal Polish Archaeology in the Mediterranean.

A Christan kingdom in the heart of Africa

“The period between the late eighth and 12th centuries is claimed to have been the golden age of Makuria,” says Artur Obluski, a research associate with the University of Chicago’s Oriental Institute and the University of Warsaw’s Polish Centre of Mediterranean Archaeology, on the time the crypt was likely created and used.

The wealth of Makuria is known to us through the works of Arab historians who visited the Christian kingdom.  Detailed reports, seen as largely exaggerating till recently, record impressive monasteries, now paralleled with recent archaeological discoveries of fantastic churches, such the one in teh site of Banganarti. Ruling from Old Dongola, the kings of Makuria controlled a large territory spreading across what is now North Sudan and Southern Egypt. The kings’ ability to maintain good relations with the Fatimid Caliphate, who controlled Egypt to the North, secured trade, while many Makurians even served the Fatimid Army.

When the Fatimids were succeeded by the Ayyubids, however, things changed. Having taken control of Egypt in AD 1171, the Ayyubids invaded northern Makuria. After a period of decline, the kingdom lost its independence and vanished forever.